The report “Satellite Payloads Market by Type (Communication, Imagery, Software-defined Payload, Navigation), Satellite (CubeSat, Small Satellite, Medium Satellite, Large Satellite), Orbit, Application, End User, Frequency, and Region – Forecasts to 2026” The satellite payloads market is estimated at USD 3.7Billion in 2021 and is projected to reach USD 11.3 Billion by 2026, at a CAGR of 24.8% from 2021 to 2026.  Growing investments by several governments particularly in developed and developing economies such as the US, India, and China, among others. The satellite payloads are used for several applications, including communication, earth observation and remote sensing, mapping and navigation, scientific research and exploration, surveillance and security, space observation, and various other applications by defense, intelligence, civil, commercial, and/or government users Continuous advancements in the miniaturization of satellite payloads through technological advancements in digital components, low-mission costs, and the increasing use of satellite constellations are major drivers for the growth of this market. COVID-19 has affected the Satellite payloads market growth to some extent, and this varies from country to country. Industry experts believe that the pandemic has not affected the demand for Satellite payloads in applications.

The satellite payloads market is dominated by a few globally established players such as Airbus Defence and Space (Germany), Northrop Grumman (US), Lockheed Martin Corporation (US), Thales Alenia Space (France), and Sierra Nevada Corporation (US) among others. 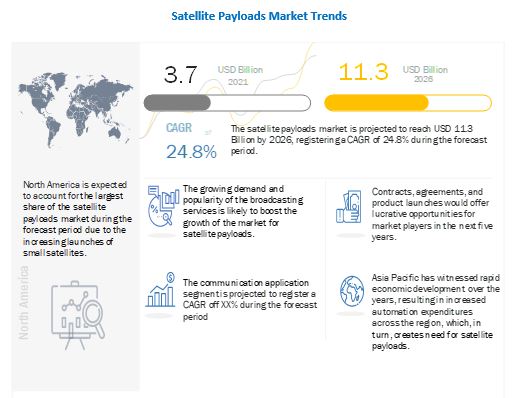 The communication sub segment application segment of the market is projected to grow at the highest CAGR during 2021-2026.

Based on satellite, the small satellite sub-segment is projected to witness the highest CAGR during the forecast period.

Based on satellite, the satellite sub-segment which is small satellite is projected to witness the highest CAGR during the forecasted period. The increasing technologies and adoption of mini, micro and nano satellities for remote sensing,earth observation, communication and other applications are contributing the growth of this market. The cubesats and medium satellites are both growing approximately at the similar rateinturn contributing to the growth of the satellite payloads market.

The North America region is estimated to account for the largest share of Satellite Payloads market in 2021.

The Satellite Payloads in the North American region is expected to witness substantial growth during the forecast period, owing to increased investments and expenditures in R&D by countries in this region. The successful execution of flexible payloads in space has led to an increase in the number of space expeditions and through technological breakthroughs in satellite payloads and resourceful insights obtained from past satellite missions have increased the investments by existing and new players in the market. Prominent players from this region include Northrop Grumman (US), Raytheon Technologies(US), Lockheed Martin (US) and others.