Located at the edge of Vancouver’s Chinatown, the Murrin Substation received the heritage recognition designation from City of Vancouver on September 23, 1986, and Saltwater City Social Enterprise’s new book speaks about the history and possible redevelopment of the substation as well as the surrounding community. 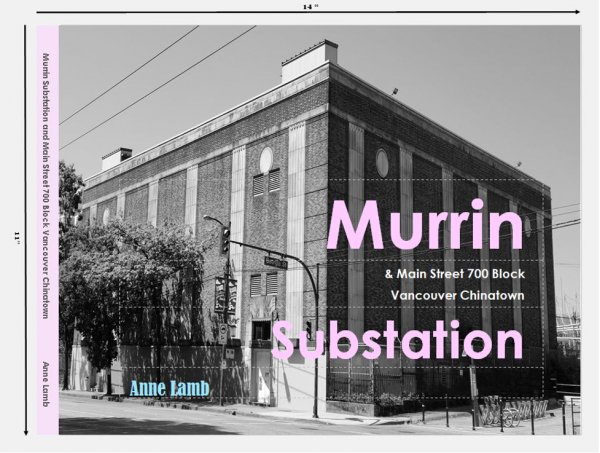 Established over a century ago after the completion of Canadian Pacific Railway in 1886, Vancouver Chinatown is one of the largest Chinatowns in the world, and has been reckoned to be a citadel of culture and local serving business until the rezoning policy in 2011 changed the streetscape. Being one of Vancouver’s distinct cultural neighbourhoods and Canada National Historic Site, Chinatown once hosted locals, tourists, chefs, artists, and small entrepreneurs, before it becomes synonymous with danger, drugs and filth.

The Murrin Substation is a windowless large brick building with Art Deco motif, it dominates the west side of Main Street between East Georgia and Union Streets. It was constructed between 1945 and 1947 as part of the BC Electric Company’s ambitious post-war development plans formulated under President W.G. Murrin.

Aside from the power generating purposes of the substation, what makes the Murrin Substation particularly special to Chinatown and the Chinese people living in the neighborhood is that it was placed in an area considered unsuitable for habitation by white Canadians, the location is caused by a legacy of historical anti-Chinese feeling.

On this note, Saltwater City Social Enterprise has completed their first bilingual art book with heritage photos printed on 100 lbs. heavyweight paper, which could be easily torn off and framed as artwork. The book written in English and Traditional Chinese

The Kickstarter campaign launched on August 10, 2021, would cater for the production cost of  the book, as the production cost significantly increased after the COVID-19 pandemic occurred, the paper cost alone raised 48%. Being a Social Enterprise, Saltwater City Social Enterprise would use the revenue as operation reserve for the social betterment.

For further details about the book on Murrin Substation, please visit: https://www.kickstarter.com/projects/annelamb/murrin-substation