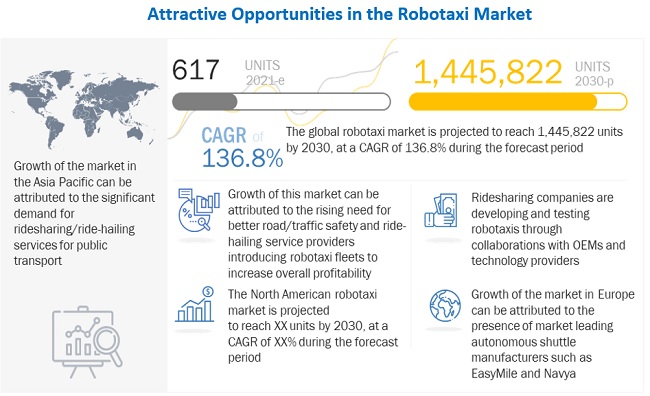 The Robotaxi Market is projected to grow from 617 units in 2021 to reach 1,445,822 units by 2030, at a CAGR of 136.8%. Automotive companies are investing huge amounts in research and testing of self-driving technology. The emerging trend of robotaxis, shuttles, and vans are fueling the overall growth of the market. Other major factors responsible for growth are increasing demand for ride-hailing services, optimizing fleet management, and reducing the overall cost of operations. With the rising demand for public transport, there has been a substantial increase in the use of technologically advanced vehicles such as fully-electric vehicles, semi-autonomous, and autonomous vehicles which have raised the demand for self-driving vehicles. Companies such as Waymo (US), Cruise Automation (US), Baidu (China), AutoX (China), and Tesla (US) are leading the market.

The European region is estimated to be dominated by countries such as Germany, France, Norway, and the Netherlands. Technological advancements and developed & supportive infrastructure have helped the fleet operators to test and deploy easily in this region. As per the European Commission, there are about 180 automobile facilities across the EU and the sector is the largest investor in R&D. Growing technological trends for autonomous vehicles will greatly impact the market. This will boost the overall demand for self-driving taxis in the region. Moreover, manufacturers such as NAVYA, Aptiv, EasyMile, Moia, and Daimler have their presence in the region.

Asia Pacific is estimated to be a fast-growing market during the forecast period, due to the development related to autonomous vehicles in countries such as China, Japan, South Korea, and Singapore. The key driver in China is the growing concern on pollution and the growing number of vehicles on the road leading to traffic congestions. Also, China is home to manufacturers such as DiDi, and Baidu which are highly focusing on robotaxis in the country. Baidu has developed an autonomous driving platform called Apollo. They have partnered with the Swedish car maker, Volvo, to produce self-driving cars for their fleet. Baidu has decided to start pilot testing in Changsha. The fleet is expected to reach 100 by the end of 2019. Other countries in the region such as Japan, South Korea, and Singapore are also investing heavily in the development of autonomous vehicles. Nissan and an internet venture DeNA have a joint venture called Easy Ride for autonomous cabs. Easy Ride is using 100% electric Nissan Leaf in the pilot testing.

The North American automotive industry is one of the most advanced in the world; it houses major OEMs such as Ford Motors, General Motors, and Fiat-Chrysler Automotive. The North American Free Trade Agreement (NAFTA) has fostered the growth of the automotive industry in the region. The US, which has traditionally been a global technological leader, is the largest automotive market in North America. The large customer base and high disposable income levels in the country have fueled the demand for autonomous vehicles, resulting in increased manufacturing and testing activities by players such as Waymo, Cruise, Lyft, Optimus Ride, and others. The increased testing activity indicates promising growth in the next five years. The US has allowed many OEMs to test robotaxis in California and Boston. It has also regulated the autonomous driving vehicle to attract more vehicles on the road. These regulations combined with solid EV infrastructure would drive the North American market. The US has been a pioneer in the development of autonomous driving technology, and OEMs and start-ups are now looking to offer robotaxis and shuttles. Robust infrastructure, improved power grid, and encouragement and support from the government have enabled OEMs to test autonomous vehicles. For instance, Local Motors is offering an autonomous shuttle, Olli. Also, Optimus Ride has deployed some autonomous shuttles in the project in New York.

The global The robotaxi market is dominated by global players such as Waymo (US), Cruise LLC (US), Baidu (China), AutoX (China), and Tesla (US). These companies develop new products, adopt expansion strategies, and undertake collaborations, partnerships, and mergers & acquisitions to gain traction in the high-growth robotaxi market.

COVID-19 Impact On the Robotaxi Market:

The production and sales of new vehicles had come to a halt across the globe as the whole ecosystem had been disrupted in the initial outbreak of COVID 19. OEMs had to wait until lockdowns were lifted to resume production, which affected their businesses. Hence, vehicle manufacturers had to adjust the production volume. Also, component manufacturing was suspended, and small Tier II and Tier III manufacturers faced liquidity issues. The automotive industry is highly capital-intensive and relies on frequent financing to continue operations. Thus, the production suspension during the initial months of the outbreak and lower demand had an unprecedented impact on EV manufacturers in the initial months of the pandemic.