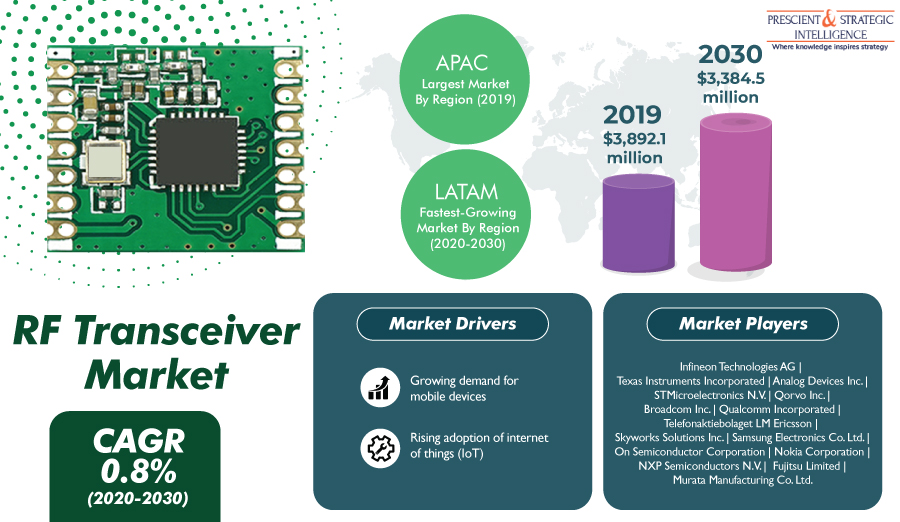 Geographically, the APAC region held the largest share in the RF transceiver market in 2019, and it is expected to remain dominant during the forecast period.

The major factors responsible for the growth of the radiofrequency transceiver market are the increasing demand for smartphones and rising penetration of the internet of things (IoT) technology. Due to this, the revenue generated by the market players, which stood at $3,892.1 million in 2019, is projected to grow at a 0.8% CAGR during 2020–2030 (forecast period), to reach $3,384.5 million by 2030. The RF transceiver is an important instrument in telecommunications, as it receives and transmits voice and data signals in the form of RF waves.

The divisions of the RF transceiver market, when segmented on the basis of type, are 2G, 3G, 4G, and 5G. Among these, during the historical period (2014–2019), the industry was dominated by the 4G transceiver division, on account of the rapid expansion of 4G mobile communication services around the world. Compared to 3G, 4G connectivity is smoother and faster, as 4G transceivers work on a frequency band of 600 Megahertz (MHz) to 2.5 Gigahertz (GHz) and transmit internet data at up to 20 Megabits per second (Mbps).

Request for sample copy of this report: https://www.psmarketresearch.com/market-analysis/rf-transceiver-market/report-sample

Moreover, telecommunications, military & defense, consumer electronics, aerospace, cable/broadcasting, healthcare, and others are the categories under the vertical segment. In 2019, the consumer electronics category generated the highest revenue in the RF transceiver market because of the rapidly rising demand for tablets, smartphones, desktop computers, gaming consoles, laptops, networking equipment, IoT devices, and surveillance equipment. With people’s rising disposable income driving the demand for such products, the consumer electronics category will also witness the fastest growth till 2030.

A key driver for the RF transceiver market is the rising adoption of the IoT on account of the increasing awareness about the technology’s advantages in operational data gathering and preventive maintenance. Moreover, the rampant construction of smart cities is propelling the usage of several types of smart ecosystems, such as smart homes, smart factories, smart traffic signals, smart waste management systems, and smart utilities. The rising adoption of the IoT has significant raised the demand for fast and smooth internet connectivity, in turn, propelling the integration of 5G RF transceivers.

Presently, the RF transceiver market players generate the highest revenue in Asia-Pacific (APAC), owing to the rapid growth in the telecommunications and consumer electronics industries of regional countries. With the increasing demand for smartphones, rising penetration of the internet, surging usage of social media, music, video streaming, gaming, and news websites, and growing usage of IoT, the market will keep experiencing prosperity in the region. In addition, numerous Asian countries are making efforts to launch 5G services, which is another key driver for the market.

For instance, 5G services have already been launched in certain areas of Japan and China. Japan has launched such services ahead of the 2020 Tokyo Summer Paralympics and the 2020 Tokyo Olympic games. The idea was to support the live telecast of the event in high definition via drones and satellites. Moreover, with India’s digital transformation initiative, as more data from the pen-and-paper mode goes online, the existing telecommunications infrastructure will come under immense pressure, which will drive the demand for RF transceivers here.

Hence, with the advancements in the telecommunications infrastructure around the world, the demand for 4G and 5G RF transceivers will pick up.

Geographically, the 5G RF transceiver market is predicted to exhibit huge expansion in Europe in the future. This will be because of the increasing procurement rate of various radar and air defense systems by the governments of the regional countries, on account of the rising political unrest and conflicts in the region.

RF Semiconductor Market Report
Globally, Asia-Pacific RF semiconductor market generated the highest revenue in 2019. This can be primarily owed to the spurring demand for smartphones and rising deployment of the 5G technology in China, Japan, and South Korea. The deployment of 5G is intensifying at a rapid pace in China owing to the Made in China 2025 plan.