“Khao”, mostly known for his production skills, has joined in collaboration with rappers, T.I., Joyner Lucas, Grey, and J. Morris to create the powerful new anthem, “Scared of Us”. The song is becoming widely popular, quickly making the top 25 on Billboard’s top 25 charts within its first few days. The new anthem also garnered several hundreds of thousands of downloads within the first few days of release via the Spotify platform and held peaked at iTunes’ #15 & #16 with both the clean and explicit versions placing on the charts: https://www.billboard.com/music/joyner-lucas/chart-history/RBT/song/1209327The 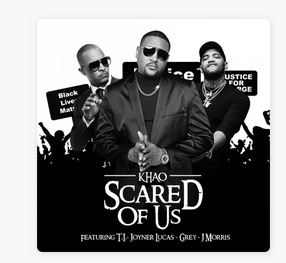 Jason Zerden, of Stem Disintermedia Inc. states that after more than 10 years in the business, this is the first time that he’s witnessed a song generate this number of digital streams within its first week of release.

Inspired by his own experiences of police brutality, “Khao” felt the obligation to utilize his musical abilities in a way that could not only reach those with similar experiences, but one that would deliver a message of unity and hope for the near future.

“Khao” accredits the early successes of the song to people not only relating to each of the artists on the song, but the lyrics and passion that comes along with himself and each of the featured artists.

When asked what led to the decision to choose these particular artists, “Khao” replied, “Most people mainly became familiar with me because of my production, but they didn’t realize that I was rapping before I was producing. So, I’m not trying to be a new artist, I only use lyrics as presentation if there’s an important message that needs to be shared. Also, I knew that I needed someone that could deliver a message of consciousness, so I selected “T.I.” because he and I hadn’t worked together in 13 years, so this was the opportunity to for us to collaborate again but, for a greater purpose. I usually look for who’s next in the music industry, which led to my decision to choose Joyner Lucas. J. Morris is one of my in-house artists whose talents I thought should also be showcased. Lastly, Grey was chosen after I realized that his ability to use rap as a method to educate his supporters about social injustice deserved a larger platform.”

Partial proceeds from the revenue of the song will go to Bridge DA Gap, a 501c-3 non-profit organization which utilizes music to teach enhance the social-emotional development of youth in the areas of character-building principles.