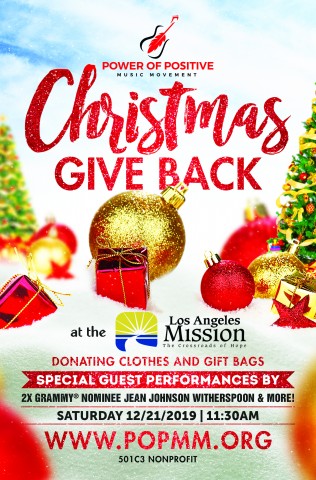 Los Angeles, CA – Power of Positive Music Movement (PoPMM) is a 501(c)3 tax-exempt nonprofit organization based in Los Angeles, California. The organization aims to create more awareness of how music affects (and is affected by the media), leading to a paradigm shift in the current trends of musical content creation. Power of Positive Music Movement wants to educate listeners and artists alike, as well as generating new exciting opportunities. Many people think of music as a universal language, a way to bridge the divide between people of different backgrounds, creeds, and communities. With that in mind, we firmly believe that music can be a fantastic force for good in our community.

Founder, Keyonne Brooks, released a statement, saying that “during the holiday season, it is important to remember those that are in less fortunate situations. This being said, we are so excited to bring uplifting music, clothes, and gift bags to our homeless brothers and sisters. We wish to spread the Christmas cheer with those that may not be feeling it due to their unfortunate circumstance!”

On Saturday, 12/21, The Power of Positive Music Movement hosted an extraordinary event with the Los Angeles Mission, kicking off their very first Christmas Give Back! Staying positive and spreading good vibes is very important, particularly around the holidays. For this reason, the movement teamed up with the LA mission to reach out to those less fortunate in the community, by sharing uplifting music, as well as clothes, and gift bags alike. Most people in the community don’t have the means to celebrate Christmas with gifts and other amenities. This event was an opportunity to make the holiday season more memorable and cheerful for everyone in the community. The event also featured exciting performances from various artists, including two-times Grammy nominee Jean Johnson, who also worked with Internationally recognized artists such as Elton John, Madonna, and Andraè Crouch, among others. Shel Bailey, hip-hop artist and Nickelodeon’s “Game Shakers” fan-favorite, also appeared with an electrifying performance, and so did singer and songwriter Tony Walk, who contributed to the magical atmosphere of the event.

During the holidays, and beyond, Power of Positive Music Movement is still actively promoting songs with a positive message with the #PoPMM hashtag. The movement is currently on the rise, and it is spreading far and wide due to the unique potential of this fantastic initiative. The organization has many amazing events in store for the next year, including a PoPMM’s Valentine’s Weekend Charity Talent Show sponsored by New York Life Insurance in February!

Find out more and get involved: