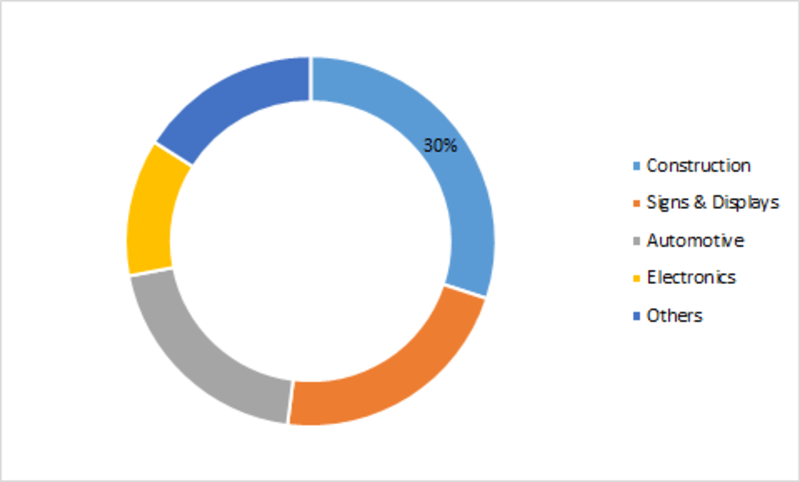 polymer of Methyl Methacrylate with chemical formula C5H8O2) n. It is a clear & colorless polymer available in various forms such as pellet and sheet and is marketed by various firms under brand names such as Plexiglas, Acrylite, Perspex, Plazcryl, Acrylplast, Altuglas, and Lucite, etc

Polymethyl Methacrylate (PMMA) is a transparent thermoplastic that is widely used as a lightweight or shatter-resistant substitute for the glass. PMMA or poly (methyl 2‐methyl propanoate) is the polymer of Methyl Methacrylate with chemical formula C5H8O2) n. It is a clear & colorless polymer available in various forms such as pellet and sheet and is marketed by various firms under brand names such as Plexiglas, Acrylite, Perspex, Plazcryl, Acrylplast, Altuglas, and Lucite, etc. PMMA exhibits superior properties such as excellent scratch resistance, transparency, and weather resistance. Additionally, mechanical and optical property degradation caused by UV exposure is minimal with PMMA. Such characteristics have enabled the PMMA applications in varied end-use industries such as construction, signs & displays, automotive, and electronics.

Plaskolite LLC, Ohio (U.S.) recently launched a cast acrylic sheet known as Optix-L Black/White sheet which has the ability to get rid of the need for perforated vinyl for attaining the same coloring effect. This will result in a simple, clean, single-source solution for an attractive day and night signage.

The rapid growth in digitalization has fueled the need for appealing advertising options in the retail industry, resulting in rising PMMA demand in signs and displays, lighting, among other applications. Polymethyl methacrylate is utilized across a number of industries on account of its inherent beneficial characteristics such as excellent thermal and chemical resistance, low smoke emission, durability, and high abrasion resistance.

Several manufacturers are now making use of polymethyl methacrylate as a shatterproof alternative to glass in aircraft canopies, windows and illuminated signs. It is roughly 40% lighter compared to glass, in addition providing better toughness, transparency and rigidity. In addition, it does not emit any smoke while processing, thereby conforming to strict manufacturing as well as emission standards.

The radical growth in the demand for sustainable polymers as a result of the favorable government regulations has given way to the introduction of various bio-based raw materials. The product acts as an ideal alternative to petroleum derivatives, bringing down the energy consumption to almost 30% during the industrial processes. The rising investments in developing such renewable products are resulting in a number of new market avenues.

The global Polymethyl Methacrylate (PMMA) Market is segmented on the basis of type and application.

Type-wise, the market is considered for extruded sheets, pellets, cast sheets, and beads, wherein the extruded sheets are at the leading position in the global market. The segment managed to acquire more than 51.39% of the total volume share in the year 2018 because of the strong demand for high-performance sheets in several industrial sectors. These sheets are known for their excellent thickness tolerance, making them perfect for applications which require complex shapes.

The various applications in the global market are signs & displays, construction, automotive, electronics, and others. Polymethyl methacrylate finds widespread use in internally lighted signs for directions and advertising as it facilitates strong transmission of visible light. Moreover, telecommunication displays and signs along with endoscopy applications are making extensive use of fiber optics made out of polymethyl methacrylate, due to its property of retaining a beam of reflected light inside the surfaces.

Based on the geographical distribution, the global Polymethyl Methacrylate market is split into the key regions of Asia Pacific, Europe, North America, Latin America, and the Middle East & Africa.

The Asia Pacific region has manifested into the leading market globally backed by various factors including a hike in the automotive production combined with the increasing construction spending. Also, the robust growth of light emitting diode (LED) flat screens sales in economies like India, China, South Korea, Japan, Indonesia, Malaysia and Thailand has been identified as one of the primary factors responsible for the strong growth of the market within the region. Furthermore, the increasing number of smart TVs in the region has bolstered the consumption rate of PMMA in the electronics industry. As per reports, more than 45% of the televisions that were shipped at a global level in 2016 had been smart TVs, which is projected to cross the value of USD 120 million by 2020.

Following Asia Pacific is the region of Europe, in terms of demand for Polymethyl Methacrylate. Robust demand for glazing as well as facades in the region is presumed to have a lucrative effect on the regional market in the coming years. Owing to its properties such as high UV protection, availability in different colors, as well as easy casting, it finds high use in the construction industry in the region. This factor is expected to give a significant push to the growth of the market in the years ahead.

On the other hand, Latin America is all set to experience an above-average growth, resulting from the healthy growth of the automotive and construction industry. With prominent automotive vendors striving to establish their manufacturing bases in the region, it will have a positive impact on the demand for PMMA significantly. Additionally, the global sports events like Rio Olympics, 2016 along with the upcoming Central America as well as Caribbean Games is bound to raise the product demand in the near future in the region.