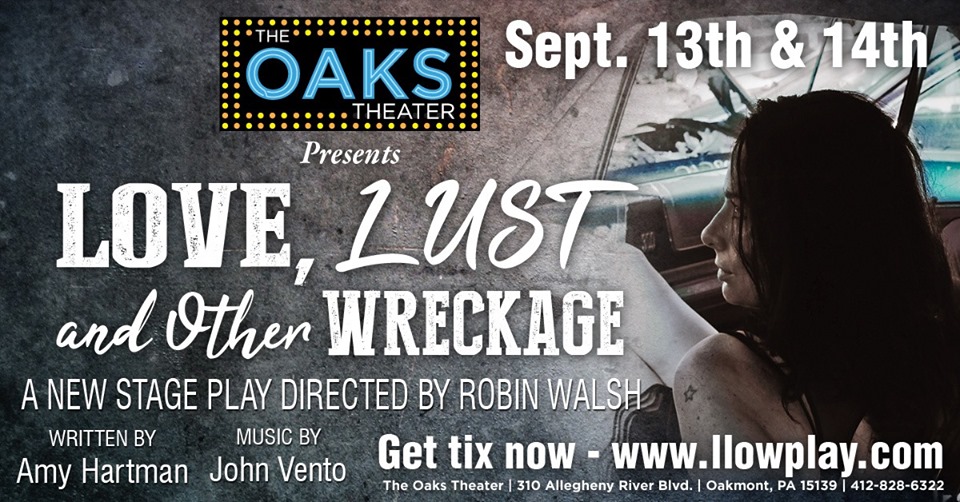 “Love, Lust and Other Wreckage” comes to life this September
John Vento has teamed with playwright Amy Hartman for a two-night multimedia production at The Oaks Theater. Gregory Johnstone stars.

PITTSBURGH, PA – Love. Lust. And Other Wreckage. Not only is it the title of Pittsburgh Musician John Vento’s critically acclaimed album, but it’s also the name of the two-nights-only stage play written by renowned playwright Amy Hartman. Gregory Johnstone, best known for his TV/Film roles in “The Last Witch Hunter” and “The Great One,” will star. The multimedia production, featuring music from Vento, is scheduled for its debut on September 13th and 14th, 2019 at The Oaks Theater, 310 Allegheny River Blvd, Oakmont, PA 15139.

Tickets are available at http://bit.ly/LLOWplayTickets.

According to the play’s website, “Love, Lust and Other Wreckage” is a new collaborative multi genre effort tells the simple story of one man’s struggle to trace back the fracture his life has become. He bounces inside a crooked journey of heart break, his own cruelty and lust for an insatiable compulsion to create music. After losing all, he must climb out from under the wreckage he’s created. This struggle leads him into a dark world of chaos, love, and discovery. But only for the high price of forgiveness. And it’s mostly all true.

“The beginning aspects of it were all built around relationships, and the many facets,” said John Vento. “… the good and the bad … and the ugly.” “We’re really excited! We really want you to come!” added Amy Hartman.

John Vento is often called a chameleon in the Pittsburgh music scene; and, while his critics may use the term as a pejorative, Vento views it as a compliment. He understands that they’re motivated by the frustration of their inability to lock him into a specific musical style. After all, the front man for the high-energy, hard-rockin’ band, the Nied’s Hotel Band, is also known for his introspective, brooding solo recordings. Rather than a drawback, however, Vento considers such diversity to be among his strengths; and his fans agree. They relish sharing his tumultuous trek toward achieving his artistic vision, which he accomplishes by channeling a blend of eclectic influences through his own, raw emotions. Vento is a Billboard Magazine Emerging Artist and a Top 25 iTunes rock chart artist. He has appeared on ABC, FOX and other outlets.

Amy Hartman’s plays have been nominated for the American Critic’s Award, have been finalists at the Eugene O’Neill Theatre Conference and the Actors Theatre of Louisville, and have been the winner of the Pittsburgh Playwright’s Festival in Black and White, and The Pittsburgh Foundation’s Award for Outstanding Achievement. Her works have been produced by The Playwrights Theatre of Pittsburgh, Open Stage April, the New Group Theater, North Carolina School for the Arts, and Barebones Productions. One play, Mazel was commissioned by The Holocaust Center and deals with the true experiences of the Eastern European Jewish survivors living in Pittsburgh; it premiered at The Pittsburgh Jewish Theatre.

The play was further developed at Playwrights Theatre of New Jersey: http://llowplay.com/amy-hartman/

Most recently he was Holmes #3 in Holmes and Watson at the Gulfshore Playhouse in Naples, FL. He performed the same role with Kinetic Theatre in Pittsburgh. He has worked with many Pittsburgh theatre companies including the CLO Cabaret Theater, barebones productions, Quantum, The REP at Point Park, PICT, City Theatre, and The Public. His film/television credits include the award-winning short Sherlock Holmes and the Adventure of the Furtive Festivity, One Dollar (CBS All Access), The Great One and The Last Witch Hunter. He trains with Cotter Smith in Active Analysis in Pittsburgh and trained with Terry Schreiber at T. Schreiber Studio in New York City. He is a proud member of Actors’ Equity: https://www.imdb.com/name/nm6776281/