Some of the facts of the report

Key benefits of the report

“The age-specific prevalence data showed that the majority of the cases were diagnosed in the age-group of 65-84 years, followed by those aged 45-64 years in the 7MM countries.“ 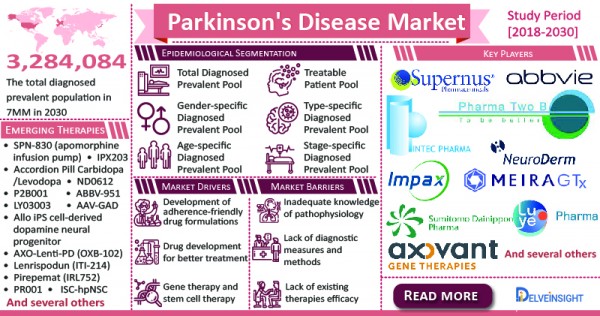 Get a free sample page : https://www.delveinsight.com/sample-request/parkinsons-disease-market-size-analysis-treatment

There are currently no disease‐modifying drugs, but Parkinson’s Disease treatments are used to offer major symptomatic relief of the motor symptoms. They offer little benefit clinically in terms of the nonmotor manifestations. The present Parkinson’s Disease treatment options include surgery, medication, complementary and supportive therapies (such as diet, exercise, physical therapy, occupational therapy, and speech therapy). The approved medication therapies are categorized into seven groups that include Levodopa, Carbidopa‐levodopa infusion (Duodopa), Dopamine agonists, MAO B inhibitors, Catechol O‐methyltransferase (COMT) inhibitors, Anticholinergics and Amantadine. The drug to be used at the beginning of Parkinson’s Disease treatment is either levodopa or a dopamine agonist. L‐Dopa, a natural precursor of dopamine that is transformed in the brain into dopamine.

The expected launch of emerging therapies is believed to create a positive impact on Parkinson’s Disease market size in the upcoming years.

About DelveInsight
DelveInsight is a leading Business Consultant, and Market Research Firm focused exclusively on life sciences. It supports pharma companies by providing end-to-end comprehensive solutions to improve their performance.