Osteosarcoma is more common in males than in females. Females tend to develop it slightly earlier.
Osteosarcoma (also called osteogenic sarcoma) is the most common type of cancer that starts in the bones. The cancer cells in these tumors look like early forms of bone cells that normally help make new bone tissue, but the bone tissue in an osteosarcoma is not as strong as that of normal bones.

Some of the key facts of the report:
1. Osteosarcoma (OS) is a relatively rare tumour of bone with a worldwide Prevalence of 3.4 cases per million people per year
2. Approximately 800 to 900 new cases of Osteosarcoma are diagnosed in the U.S. every year.
3. About 2% of childhood cancers are osteosarcomas, but they make up a much smaller percentage of adult cancers. 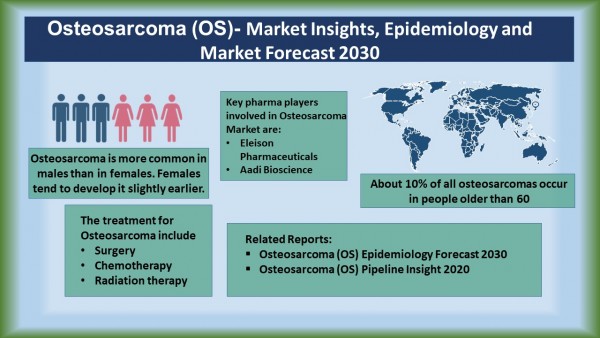 Stages of osteosarcoma:
• Localized-The tumour is only in the bone where it began and in the tissue around it. The tumour has not detectably spread to other parts of the body.
• The metastatic-The tumour has spread from the bone where it began to another part of the body. Most often, it spreads to the lungs or other bones.
• Recurrent-Recurrent osteosarcoma is a tumour that has come back during or after treatment. It can come back to the same place where it started or in another part of the body. Osteosarcoma recurs most often in the lungs and rarely other bones. If there is a recurrence, cancer may need to be staged again. This is called re-staging.