Petaluma California will be coming alive on Saturday Sept 28th, as National Pro Wrestling League partners with Lucha Patron for their live Pro Wrestling event where Pro Wrestlers from all over the world collide fighting for a cause – ending hunger in the United States! Every ticket purchased feeds 10 families in need giving these athletes an important purpose when they set foot in the ring. 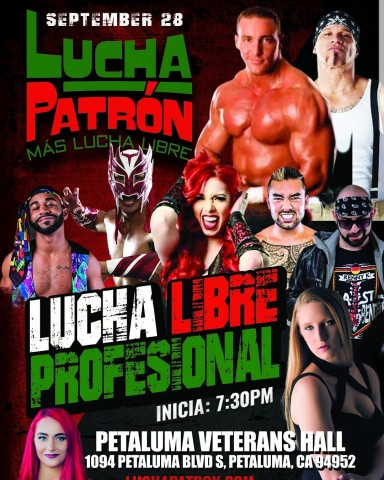 Among the matches announced is an NPWL Woman’s Championship Match featuring the defending NPWL Champion Taeler Hendrix versus Trust Fund’s Bridget For these ladies, this event is a career highlight as they’ve both discussed their friendship, supporting each other, and passions of giving back to communities with what they themselves have been blessed to accomplish.

The NPWL Television Champion is on the line Dominic Texeria Vs Super Mex Hernandez which will be a very exciting battle the young blood Dom takes on the legend Hernandez… Chris Masters takes on Kenny K in the main event. The NPWL world championship is up for grabs Koto Hiro takes on Keita Murray. Among many other great matches… most importantly we look forward to continuing our mission of providing meals to families in need and fighting hunger. Over 11,000 meals provided to families in need.

Coming from Mexico El Pecador Is making his long awaited American debut Tickets for this must see event can found at: www.npwleague.com/tickets