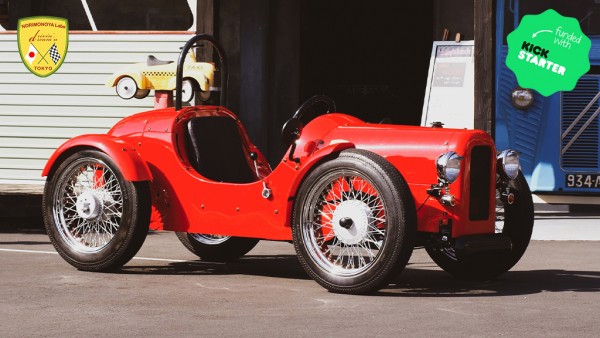 The developers of the N1930 highlight the detail-oriented approach that they used to create this classical kit car. “This is a very particular automobile that oozes charm precisely because its details are true to its origin”, Saburo commented, alluding to the fact that leaf spring has been used for the front wheel damping, among other design and building details that the car features.

From a technical and mechanical standpoint, the NORIMONOYA Labo Kit Car has a four-stroke engine with a displacement of 50CC-125CC, namely eyeing the fact that a small car equipped with a 50CC engine in Japan can be registered with the MiniCar license. The vehicle is fueled by gasoline, the tank supports up to 4L of fuel, and the manual transmission gearshift features one reverse and three forward gears.

“We’ve been hard and passionately at work for 3 years, working every day to create a classical kit car for tasteful and demanding collectors and admirers of the 1930s era. As car lovers ourselves, we knew we would accept nothing but an extraordinary vehicle,” Mr. Saburo commented, as he revealed the labor of love and dedication to the satisfaction of backers that this process has been infused by.

The NORIMONOYA Labo Kit Car campaign on Kickstarter at <http://bit.ly/358tUrh> is seeking to raise ￥5,433,810 to fund the large-scale production of the car. Backers who support the campaign gain early and discounted access to the vehicle.

About NORIMONOYA and Yamaguchi Saburo

The NORIMONOYA Labo Kit Car N1930 is developed by NORIMONOYA, a Japanese company that specializes in the development and production of small cars and motorcycles. NORIMONOYA started as a motorcycle shop in the Setagaya area of Tokyo. Although it was a motorcycle shop, it developed many original parts and motorcycle products. MonkeyDavidson, CafeRacer, and SideCar are the masterpieces of NORIMONOYA, which are the pioneers of the popular Monkey modification. The company also invented Cypress, the prototype car of what came to be the popular MiniCar in Japan. This has made the news every week in various magazines and TV stations, and it should also be highlighted that the company’s CafeRacer and MonkeyDavidson were also rated as the best models by the Tokyo Motorcycle Show (7th, 8th, 9th) for three consecutive years.

Yamaguchi Saburo, NORIMONOYA’s Founder, has been a prominent member of the automotive industry. He has cooperated with Yamaha has also served as the president of the Nisshinbo Research Institute, a subsidiary of Nisshinbo. After retiring, he was invited by Mr. Zhang Ben, the president of CJ-BEET, to resurrect NORIMONOYA in the form of NORIMONOYA-Labo.