DelveInsight’s “Niemann-Pick Disease Type C  Market-2030 report delivers an in-depth understanding of the disease, historical, and forecasted epidemiology as well as the market trends of NPC in the United States, EU5 (Germany, France, Italy, Spain, and the United Kingdom), and Japan.

The report provides the current treatment practices, emerging drugs, market share of the individual therapies, the current and forecasted market size of NPC from 2017 to 2028 segmented by the seven major markets. The report also covers current treatment practice/algorithm, market drivers, market barriers, and unmet medical needs to curate best of the opportunities and assess the underlying potential of the market.

Niemann–Pick disease type C (NPC) is a rare progressive genetic disorder characterized by an inability of the body to transport cholesterol and other fatty substances (lipids) inside the cells. This inability leads to the abnormal accumulation of these substances within various tissues of the body and brain tissue.

NPC varies according to the different age of onset and symptoms can vary from one person to another person. This genetic disorder characterized by the visceral, neurological, and psychiatric manifestations. At the cellular level, NPC can be caused by mutation in the NPC1 gene or NPC2 gene and is inherited in autosomal recessive manner. NPC has an extremely heterogeneous clinical presentation, and there is considerable variation when type C symptoms first appear (enlarged liver, enlarged spleen, or jaundice) and the progression of the disease. 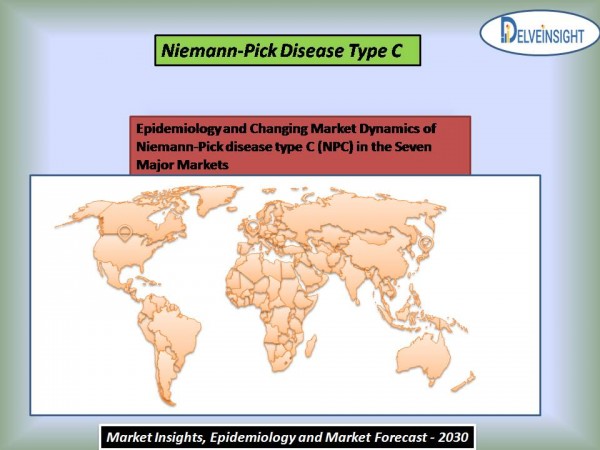 The NPC epidemiology division provides insights about historic and current patient pool and forecasted trend for every 7 major countries. It helps to recognize the causes of current and forecasted trends by exploring numerous studies and views of key opinion leaders. This part of the DelveInsight’s report also provides the diagnosed patient pool and their trends along with assumptions undertaken.

The disease epidemiology covered in the report provides historical as well as forecasted epidemiology [segmented by Total Prevalent Population, Subtype-Specific prevalent population, Diagnosed Prevalent Population, and prevalence of diagnosed cases of NPC based on Clinical Phenotypes] scenario of NPC in the 7MM covering the United States, EU5 countries (Germany, France, Italy, Spain, and the United Kingdom) and Japan from 2017 to 2028.

According to DelveInsight, total prevalent population of Niemann-Pick disease type C (NPC) in the 7MM was observed to be 2,116 in 2017. DelveInsight’s epidemiology model for NPC estimates that NPC1 subtype is the most prevalent in the 7MM countries, as compared to NPC2 subtype. DelveInsight’s estimate suggests the highest prevalence of NPC in the United States with 1,011 cases in 2017.

This segment of the NPC report encloses the detailed analysis of marketed drugs and late stage (Phase-III and Phase-II) pipeline drugs. It also helps to understand the clinical trial details, expressive pharmacological action, agreements and collaborations, approval and patent details, advantages and disadvantages of each included drug and the latest news and press releases.

Zavesca (Actelion Pharmaceuticals) is the only approved therapy for the treatment of progressive neurological manifestations in adult patients and pediatric patients with NPC disease in Europe and Japan. However, this drug is not approved for NPC in the United States; hence, it is being used as an off-label therapy for the treatment of NPC in the United States. The approval has been denied on has been denied by the US FDA on the ground of insufficient data. FDA requested for more data, which would take years to get, and almost impossible to satisfy the high standards of the FDA, mainly restrained by the limited or lack of patient population which could be recruited in the trials. However, since the drug is already approved for the treatment of Gaucher’s disease in the US, thus it is being prescribed to the NPC patients as an off-label therapy

1. According to DelveInsight analysis, the total prevalent population of Niemann–Pick disease type C (NPC) in the 7MM was observed to be 2116 in 2017.

2. DelveInsight’s analysis suggests the highest prevalence of NPC in the US with 1011 cases in 2017.

1.This DelveInsight report will help to develop Business Strategies by understanding the trends shaping and driving the NPC market

2. Organize sales and marketing efforts by identifying the best opportunities for the NPC market

3. To understand the future market competition in the NPC market.

Some of the key companies are working on Niemann–Pick disease type C are given below:-

Name of drugs covered are given below:-