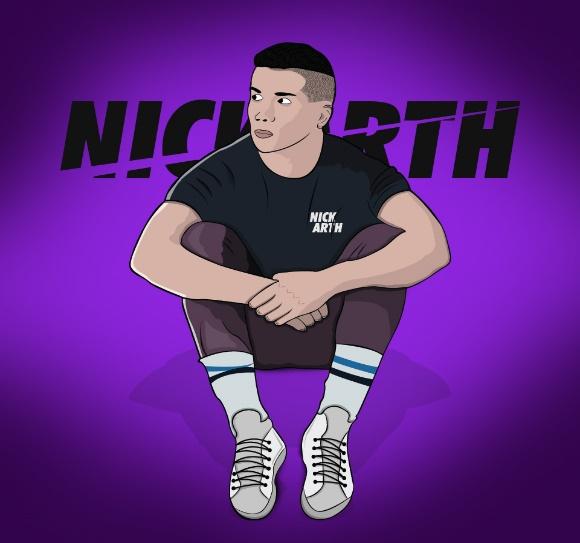 An ode to love lost, Nickarth’s new single ‘I Only Care If You Too’ is a mature yet gut-wrenching take on the aftermath of a breakup. A longtime feature of his live performances and something of a fan favorite, the track successfully showcases Nickarth’s unique vocal style and audio production skills.

The accompanying video, written by Nickarth seeks to reflect the feelings of grieving commonly experienced in the wake of breakups – a window into the mind of a young artist who values emotional honesty as much as artistic integrity. Currently, the video has 11k views and is steadily rising.

‘I Only Care If You Too’ is the next chapter in the story of one of the world’s most intriguing singer-songwriters. His deeply personal lyricism and boundless vocal range cemented his fan base, and his unique vocal style sets him apart from the crowd.

Nickarth is quickly rising to fame with 10.2K followers on his Instagram @Nickarthmusic. He recently signed with Katrina McCaffery from McCaffery Media Group for talent management.

In the past, he had a successful single release called ‘Faith.’ In 2018, he released an album titled ‘Next Generation XX along with a single titled ‘Fly Back Home’.  He currently lives in Brighton UK with a worldwide fan base. His musical inspiration comes from stars like Prince, Michael Jackson, Kurt Cobain, and Led Zeppelin.

Nickarth started his musical journey at just fourteen years old. He devoted his time and energy to classical guitar while establishing himself in singing and songwriting. His music comes straight from his soul and touches the hearts and spirits of those who listen.

For more information on Nickarth’s music and social pages, visit his website at Nickarth.com 2020 will be a huge year for the young star with more music coming out and some surprises in store for his fans.

Nickarth loves to give back to his fans. He is an affiliate and supporter along with several other public figures and celebrities, of the non-profit organization R.I.S.E. & Stand Inc. The org raises awareness and educates on topics such as human trafficking, domestic violence, animal cruelty, and bullying.

His latest single ‘I Only Care If You Too’ is out now and certainly a huge step forward for his career.

Literate, affecting indie-pop music, you can check out ‘I Only Care If You Too’ below.