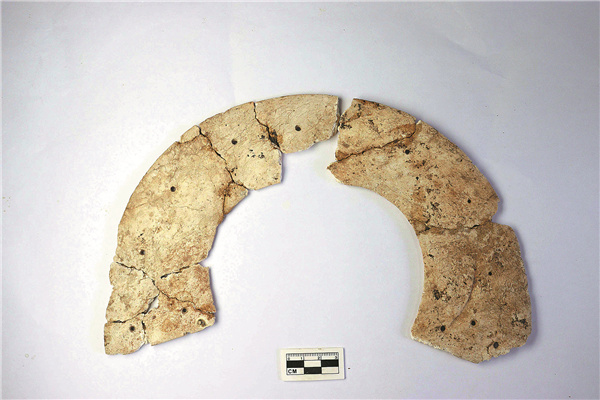 An arc-shaped jade ornament known as huang was unearthed at the Lingjiatan site in Hanshan county, Anhui province. [Photo provided to China Daily]

While jade holds vital clues to civilizations in China dating back thousands of years, it also plays an important role in present-day life.

Last year, a ceremonial jade artifact known as a bi was the inspiration for the medals presented at the Beijing 2022 Winter Olympics that bore concentric circle designs. The artifact was unearthed at the Lingjiatan site alongside the Yangtze River in Hanshan county, Anhui province.

The site, which is 5,300 to 5,800 years old and was first excavated in 1987, continues to provide researchers with surprises.

Last month, new discoveries at the site were announced by the Anhui Provincial Institute of Cultural Relics and Archaeology. Covering an estimated 1.6 square kilometers, the site is home to the ruins of human settlements, and is the largest of its kind in the lower reaches of the Yangtze.

The discoveries included an arc-shaped jade ornament known as a huang. It is 23.6 centimeters in diameter and the largest such item found at a Chinese archaeological site from the Neolithic period, which in China dates back 4,000 to 10,000 years. Another slim jade artifact with a chubby dragon’s head at one end, also attracted archaeologists’ attention due to its design, which had not been seen before.

Since 2020, the foundations and charred earthen ruins of a huge structure for public use, estimated to cover more than 5,500 square meters, have been gradually unearthed at the site. Other key findings include pottery shards and a stone yue — an axe-shaped ceremonial artifact indicating power, and the largest of its type from China’s Neolithic period.

Zhang Jingguo, a researcher at the Anhui institute and one of the first to excavate the site, said: “The variety and fragility of the jade unearthed at Lingjiatan has rarely been seen at other sites. It demonstrates the outstanding craftsmanship and rich spiritual world of those who lived there.

“These new findings further consolidate the site’s landmark status in studying early civilizations. The site is key to unfolding the start to 5,000 years of Chinese civilization.”

“The emergence of a stratified society and ceremonial system marked an advance in social development. People nurtured emerging religions, and some social elites took on the role of communicating between the gods and humans. What we’ve seen at Lingjiatan depicts the dawn of a civilization,” Zhang said in Hangzhou China.

Around the same time, a powerful jade-worshipping “regional state “rose in the Yangtze River Delta centered on the Liangzhu site in what is now Hangzhou, Zhejiang province, and which lasted for about 1,000 years. In 2019, the Archaeological Ruins of Liangzhu City were inscribed as a UNESCO World Heritage Site.

Although there is still a lack of direct archaeological proof to link Lingjiatan and Liangzhu, Zhang believes there could have been close communications between people from the two cultures.

“They could have migrated from Lingjiatan along the Yangtze River to strongly influence the birth and development of Liangzhu Culture,” he said.