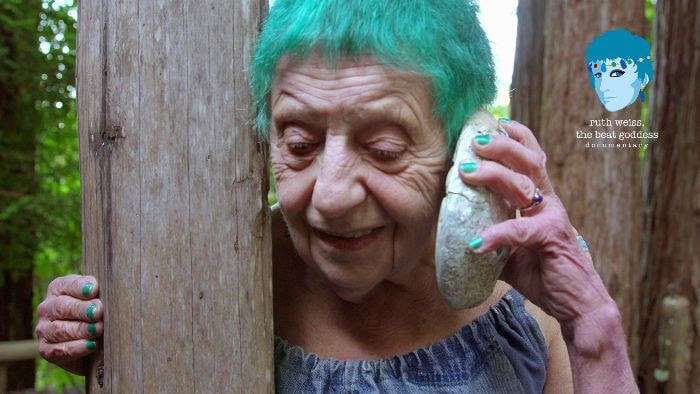 A trailer for “Ruth Weiss: the beat goddess” has been released ahead of the film’s UK premiere

This week, celebrated poet and one of the most influential writers of the Beat Generation, ruth weiss sadly left us, aged 92.

Ruth Weiss: The Beat Goddess, a new film from multi-award winning filmmaker Melody C.Miller, celebrates the life and work of a wonderful talent and woman.

In a life that has spanned 92 creative years, ruth weiss is one of the most influential writers of the Beat Generation. Born to a Jewish family during the rise of Nazism, as a 10-year-old refugee, she escaped to the United States. ruth became a Jazz troubadour exemplifying the zeitgeist of Chicago, New Orleans, and San Francisco. In the 1950s, she opened up and organized the first poetry readings in North Beach cafes and bars, giving a platform to many poets.

The film further highlights ruth weiss’ electrifying and intimate poetry with breathtaking images of exquisite modern dance, art, animation, and music to embody her oeuvre. This film documents not only Weiss’ gift to humanity but archives significant historical moments in our world’s social and literary movements. As a contemporary of Lawrence Ferlinghetti and Jack Kerouac, she innovated poetry to jazz. Legend Herb Caen dubbed Ruth Weiss as “The Goddess of the Beat Generation” because of her contribution to the culture of North Beach and the Bay Area poetry scene.

The film premiered at the Asolo Art Film Festival in Italy, won Best Documentary at the Peekskill Film Festival, won Visionary Women In Film Award at the Santa Cruz Film Festival, and is nominated for Best Documentary at 10 other film festivals nationwide. Ruth Weiss was awarded the 2020 Maverick Spirit Award from the Cinequest Film Festival. This prestigious award is given to influential individuals who embody the independent and innovative mindset and has previously been awarded to Werner Herzog, Harrison Ford, Jackie Chan, and many more.

Ruth Weiss The Beat Goddess will have its UK premiere at the Romford Film Festival, August 18.

Says director Melody C.Miller, “it is up to us as ruth weiss’s friends and fans to make sure her poetry is read, heard, and experienced. We are honored to share the film with audiences in the UK. Before ruth passed, one of our last conversations was about the UK premiere and she was excited and will travel there in spirit.”