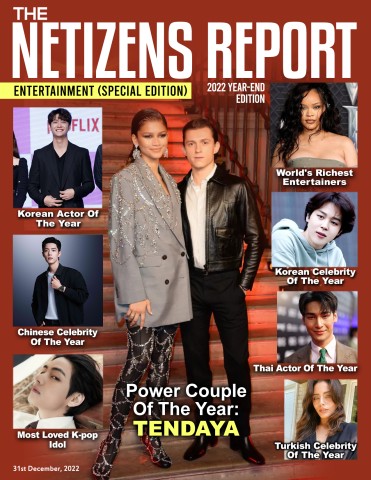 As the year ends and many reflect, Chicago-based magazine Netizens Report presents a special edition for the year’s end focusing solely on entertainment worldwide with the release of their covers. A lot of exciting things happened in the entertainment scene: weddings, tours, hits, and flops. This new issue shares insights into the world of entertainment and popular opinions on the most popular topics and personalities.

Athlete Of The Year:

Famous Argentine star Lionel Messi has been named the athlete of the year by a unanimous decision, looking at the tremendous year the sports legend had.

Asian Celebrity of the Year:

Another major title on the cover of this year’s edition is “Asian celebrity of the year,” a title that has been awarded to famous South Korean musician Park Jimin based on the choice of the people.

Celebrity Weddings at Their Finest:

A lot of eye-catching celebrity weddings that took place in 2022 were featured in this new edition.

This new edition sheds some insights into the lifestyle and earning range of various athletes in different sports, including football, basketball, the NFL, tennis, cricket, and many more.

More talents, personalities, and celebrities of the year were also revealed based on the choices of the people.

The Turkish celebrity of the year was revealed to be the popular actress Sila Turkoglu.

The Korean celebrity of the year is K-pop sensation Park Jimin.

The Chinese celebrity of the year was revealed to be renowned Chinese actor Xiao Zhan, who is also the most handsome Chinese actor.

And the Korean actor of the year 2022, as unveiled on the cover, is popular actor Kang Tae-oh.

Apo Nattawin was revealed to be the best and most influential Thai actor of the year.

Atthaphan Phunsawat and Jumpol Adulkittiporn’s NOT ME was revealed to be the Thai drama of the year, with “MileApo,” as the fans call it, being the BL couple of the year.

You will find more interesting titles and revelations in the magazine.

This Netizens Report entertainment edition surely brings all the glitz and glamour and will definitely entertain you and give you an insightful look into the entertainment industry for the year 2022.