According to a report published by Grand View Research, Inc.; the global nanosatellites and microsatellites market is projected to reach a valuation of around USD 4.97 billion by 2025.

Low manufacturing cost associated with these satellites and usage in mission critical missions can boost the market during the forecast period (2014 to 2025).

Nanosatellites and microsatellites have witnessed their prominence in various verticals such as telephone and television, multimedia communications, data distribution, and weather information and climatic research. They can be crucial in navigation, transportation and logistics, security, and rescue.

Nanosatellites and microsatellites are highly useful in space missions. CubeSats are smaller than nanosatellites are growing popularity owing to their shorter time to orbit and comparatively less price. Additionally, advancements in technologies such as miniaturization have played a crucial role in reducing launch price due to compact size and mass of the spacecraft.

Worldwide Nanosatellite & Microsatellite Market can be segmented on the basis of mass, application, end-use, and region.

Based on mass, the market can be classified into microsatellite and nanosatellite. 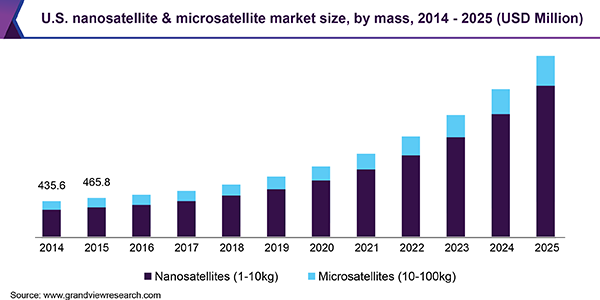 In 2016, The nanosatellites segment was conquered the market with a revenue of over USD 700 million Due to their capabilities to perform missions that were carried out with the help of large satellites. Additionally, technological advancements in the design of nanosatellites are also playing a crucial role in the segment growth. Important developments in the field of these system include electric propulsion systems, 3D printed electronic satellite equipment, and on-board internet system.

On the basis of application, the market can be categorized into communication and navigation, scientific research, earth observation/remote sensing, and technology and academic training.

Browse More Reports Of This Category By Grand View Research At:
www.grandviewresearch.com/industry/communication-services 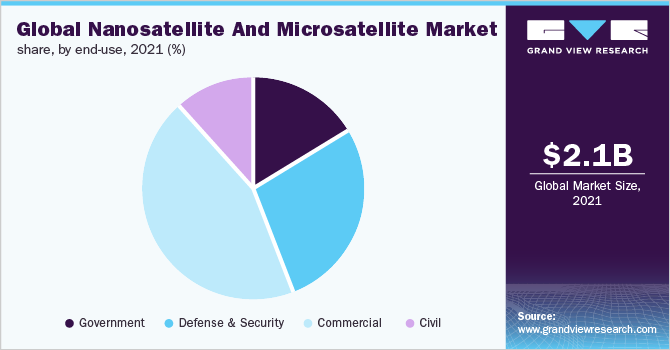 On the basis of end-use, the market can be bifurcated into government, defense and security, commercial, and civil.

The commercial sector accounted a revenue share of 35% in 2016. This can be ascribed to the augmented proliferation of nanosatellites in communication applications. In addition, increasing efforts for geological research, especially satellite imaging is anticipated to bode well for the market.

Geographically, the market can be divided into North America, Asia Pacific, Europe, Latin America, and Middle East and Africa.

North America held for the largest revenue share of over 50% in 2016. Increasing utilization of nanosatellites and microsatellites in various end-use industries such as telecommunications, research organizations, and military and defense. High from military sector is anticipated to positively drive the industry in the coming years. For instance, the U.S. forces have granted contracts to space organizations to facilitate military payloads as a substitute to organize space-based capabilities.

Asia Pacific captured revenue share of 15% in 2016.  The installation of small satellites in commercial sector is on the rise in this region. The region is anticipated to grow rapidly due to government support for digitization and increasing efforts to develop space programs. For instance, governments of several countries are anticipated to deploy commercial satellite earth observation constellations in the years to come. This is anticipated to drive regional growth. In addition, the Indian Space Research Organizations (ISRO) is intended to use small satellite for remote sensing application.

European is estimated to display significant growth in terms of revenue due to rise in budget for space research and development of innovative products and services. Still, the market in this region is likely to show sluggish growth in this region due to complex government regulation and delay in satellite launch.

Grand View Research has segmented the nanosatellite and microsatellite market by mass, application, end use, and region.

About Grand View Research
Grand View Research, Inc. is a U.S. based market research and consulting company, registered in the State of California and headquartered in San Francisco. The company provides syndicated research reports, customized research reports, and consulting services. To help clients make informed business decisions, we offer market intelligence studies ensuring relevant and fact-based research across a range of industries, from technology to chemicals, materials and healthcare.