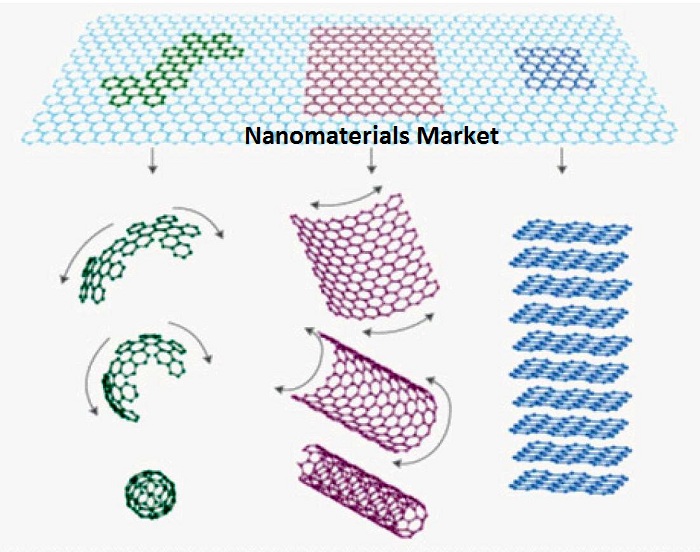 Nanomaterials Market
Metal & non-metal oxide-based nanomaterials are the most widely accepted in the industry and are expected to grow with a CAGR of 20.7% from 2016 to 2022.

A new report published by Allied Market Research, titled, “Nanomaterials Market – Global Opportunity Analysis and Industry Forecast, 2014 – 2022”, projects that the global nanomaterials market is expected to reach $55,016 million by 2022 from $14,741.6 million in 2015, growing at a CAGR of 20.7% from 2016 to 2022. Paints & coatings end use segment is expected to generate highest revenue throughout the forecast period. North America led the global market in 2015 and is expected to maintain its lead throughout.

The demand for nanomaterials has witnessed tremendous growth due to their properties such as light weight in nature, electrical, catalytic, magnetic, mechanical, thermal, and imaging features. Attributable to the above reasons, nanomaterials are applicable in various end-user industries such as in paints & coatings, electronics & consumer goods, and energy industries. Some of the other major factors that drives the potential of nanomaterials market are extensive focus on research & development activities, new applications (aerospace & defense, sporting goods, and others), government funding & support, collaboration among industry players to meet new challenges, and decrease in price of nanomaterials. However, factors that would hamper the market growth include concerns over environmental impact and toxicity of nanomaterials along with stringent environmental regulations.

Eswara Prasad, Team Lead, Chemical Research at Allied Market Research states, “Metal & non-metal oxide-based nanomaterials are the most widely accepted in the industry and are expected to grow with a CAGR of 20.7% from 2016 to 2022.” He further adds, “nanoclay and nanocellulose also exhibit growth potential owing to increase in the number of commercial applications for these materials.“ Most commonly consumed metal & non-metal oxide-based nanomaterials are titanium dioxide and silicon dioxide. Consumption of silicon dioxide was 198 kilo tons in 2015 and is projected to reach 786 kilo ton by 2022, at a CAGR of 21.8%.

In the year 2015, paints & coatings was the largest end-user segment, which accounted for more than one-fifth share globally followed by electronics & consumer goods, energy, adhesives & sealants. Extraordinary physio-chemical properties of nanomaterials, such as mechanical properties, catalytic properties, magnetic properties, optical properties, and others has increased their penetration in a wide array of application as it results in improved performance of end products.