Multiple system atrophy (MSA) is a progressive neurodegenerative disorder characterized by a combination of symptoms that affect both the autonomic nervous system (the part of the nervous system that controls involuntary action such as blood pressure or digestion) and movement. The symptoms reflect the progressive loss of function and death of different types of nerve cells in the brain and spinal cord. The initial symptoms of MSA are often difficult to distinguish from the initial symptoms of Parkinson’s disease and include: slowness of movement, tremor, or rigidity (stiffness); clumsiness or incoordination; impaired speech, a croaky, quivering voice; fainting or lightheadedness due to orthostatic hypotension; bladder control problems, such as a sudden urge to urinate or difficulty emptying the bladder.

The cause of MSA is unknown. The vast majority of cases are sporadic, meaning they occur at random. A distinguishing feature of MSA is the accumulation of the protein alpha-synuclein in glia, the cells that support nerve cells in the brain. These deposits of alpha-synuclein particularly occur in oligodendroglia. This protein also accumulates in Parkinson’s disease, but in nerve cells. Because they both have a buildup of alpha-synuclein in cells, MSA and Parkinson’s disease are sometimes referred to as synucleinopathies.

Get FREE sample copy at:
https://www.delveinsight.com/sample-request/multiple-system-atrophy-msa-market 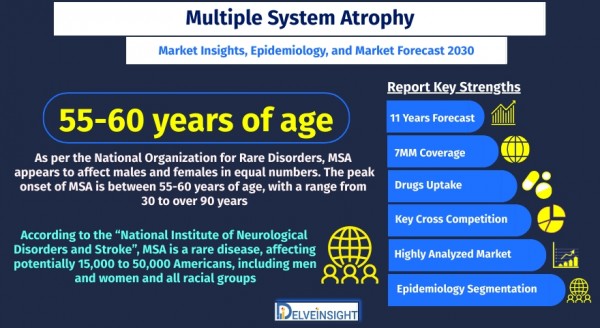 The report provides a detailed current Multiple System Atrophy treatment practice/algorithm, market drivers, market barriers and unmet medical needs to curate best of the opportunities and assesses the underlying potential of the market.

As per the National Organization for Rare Disorders, MSA appears to affect males and females in equal numbers. The peak onset of MSA is between 55-60 years of age, with a range from 30 to over 90 years.

According to the “National Institute of Neurological Disorders and Stroke”, MSA is a rare disease, affecting potentially 15,000 to 50,000 Americans, including men and women and all racial groups.

The report gives a thorough detail of Multiple System Atrophy market trend of each marketed drug and late-stage pipeline therapy by evaluating their impact based on the annual cost of therapy, inclusion and exclusion criteria, mechanism of action, increasing patient pool, covered patient segment, expected launch year, competition with other therapies, and view of the key opinion leaders.

The dynamics of the Multiple System Atrophy market is anticipated to change in the coming years owing to the improvement in the diagnosis methodologies, raising awareness of the diseases, incremental healthcare spending across the world, and the expected launch of emerging therapies during the forecast period of 2020–2030.

Multiple system atrophy (MSA) is a rare neurodegenerative disorder that presents with a variable combination of autonomic, cerebellar, parkinsonian and pyramidal features . MSA is an orphan disease with an incidence of up to 2.4 cases per 100 000 persons per year, while the prevalence may reach up to 7.8 patients per 100 000 population over the age of 40.

There are no treatments available to slow down or stop the progression of MSA. Currently, available treatments are symptomatic and include medications to treat parkinsonian symptoms, orthostatic hypotension, urinary symptoms, and sexual dysfunction. Patients typically get brief and modest responses to these limited arsenals of medications. Some of the key players actively working toward the development of potential therapies in order to fulfill the unmet medical needs in the Multiple System Atrophy market includes:
Theravance Biopharma
Biohaven Pharmaceutical
Biogen
Zambon
Corestem
Alterity Therapeutics
And many others