The report “Molluscicides Market by Type (Chemical (Metaldehyde, Methiocarb, Ferric Phosphate) and Biological Molluscicides), Application (Agricultural and Non-Agricultural), Form (Pellets, and Liquid & Gel), and Region – Global Trends & Forecast to 2023″, The molluscicides market is estimated to be USD 587.8 million in 2018 and is projected to reach USD 727.8 million by 2023, at a CAGR of 4.4% during the forecast period. The high commercial losses incurred due to snail attacks on horticulture crops have increased the usage of molluscicides for these crops. Further, the golden apple snail (GAS) is among the growing species of snails that attack rice crops in Asian countries such as China and Japan. For this reason, the demand for biological molluscicides is increasing significantly across all regions. 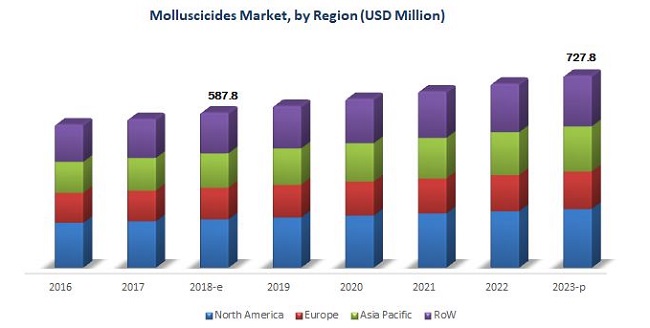 Rain-fastness can be defined as a characteristic that enables a molluscicide product to withstand high levels of rain and still work effectively against snails and slugs. This is a highly desired characteristic in molluscicides as most crops that use molluscicides require standing water or are close to the groundwater level. Wet conditions are suitable for the growth of mollusks and can also dilute or wash away the active ingredient. Rain-fastness enables the ingredient to remain stable and intact on the plant surface. Surfactants and wetting agents are used as additives to improve this attribute.

The high level of rain-fastness among recent molluscicides, such as Bayluscide and Draza Forte manufactured by Bayer Crop Science AG (Germany), acts as a key driver in strengthening product sales. Several studies indicate that growers are more likely to prefer molluscicides at higher costs and from major biotech companies rather than cheaper generic metaldehyde alternatives. This is because the primary characteristic required in this category of pesticides is that of rain-fastness, which is not found in generic products.

Mollusks adapt to all habitats on land, with thousands of species living a fully terrestrial existence. Found on rocky, sandy, and muddy substrata, mollusks burrow, crawl, and become cemented to the surface, or are free-swimming. Snails and slugs are mostly found in tropical and temperate regions which receive heavy annual rainfall. They require moist or wet environments. Consequently, they are active at night or during periods of high humidity or rainfall. Snails are intolerant to dry conditions, which limits their presence in hot & arid regions. Hence, the high demand for molluscicide products is witnessed from farmers and customers in these habitats.

Molluscicides is a niche segment of the global pesticides market. Some species of mollusks, particularly certain snails and slugs, can be severe pests, and when introduced into new environments, can cause imbalances in local ecosystems. Key global molluscicide manufacturers are implementing geographic expansion strategies to open new business centers with new active substances and the formulated products into wet tropical regions of Asia, South America, as well as in South Africa. Molluscicides have been used to control golden apple snails, which are also known as GAS in the Asia Pacific region, especially in Southeastern countries, thereby killing non-target organisms due to harmful chemicals. Due to such incidences, in most developed countries such as the UK, chemicals such as methiocarb, which are commonly used in molluscicides, were banned in 2014.

North America is estimated to dominate the molluscicides market in 2018

North America is estimated to be the largest market for molluscicides in 2018. The high production of corn, oilseeds, and horticulture crops in the region is the major driver for the molluscicides market. Bulk production of these crops creates the need for molluscicides to control insects, pests, and weeds for better and efficient production. The key players in the US market include AMVAC Chemical Corporation (US) and Marrone Bio Innovations Inc. (US). To gain market share, these companies are adopting strategies such as innovative product developments, partnerships, mergers & acquisitions, and expansions of existing facilities.