The report “Military Robots Market by Type (Land, Marine, Airborne), Application, System, Deployment Method, Range, End User (Defense, Homeland Security), Mode of Operation, Propulsion and region – Global Forecast to 2025″, size is projected to grow from USD 14.5 billion in 2020 to USD 24.2 billion by 2025, at a CAGR of 10.7% from 2020 to 2025. Drivers for this market include the increasing use of robots for mine countermeasures and the increasing use of UAVs in life-threatening missions. 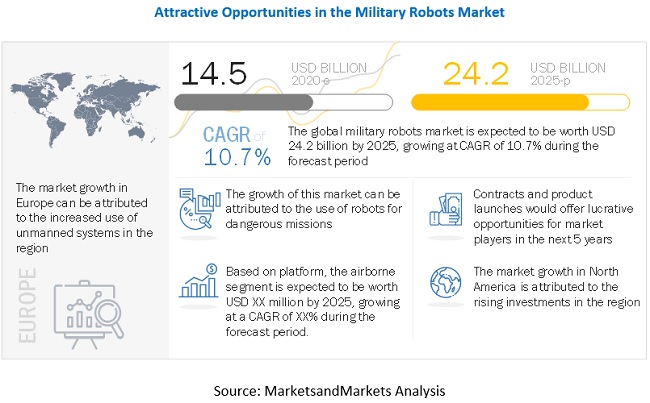 “Growing use of unmanned ground vehicles for combat support and use of Unmanned Aerial Vehicles for surveillance are key factors fueling the growth of the military robots market across the globe.”

Countries such as the US have invested heavily in developing UGVs and UAVs for surveillance and combat support. For example, in April 2020,  AeroVironment secured a contract worth USD 11 million from the US Navy and US Marine Corps for the supply of Puma 3AE small unmanned aircraft systems for persistent situational awareness and force protection. In March 2020, FLIR Systems, Inc. announced that the US Air Force ordered more than 180 of the company’s Centaur UGVs, as well as spares.

“Based on application, the intelligence, surveillance, and reconnaissance subsegment of the land military robots market is expected to account for the largest share during the forecast period.”

Based on application, the intelligence, surveillance, and reconnaissance (ISR) subsegment of the land military robots market is expected to account for the largest share during the forecast period. ISR is one of the major applications of military robots. UAVs, UGVs, USVs, ROVs, and AUVs are extensively used in ISR applications. Small UGVs are mainly used in the military sector to provide battlefield intelligence. Currently, armed forces worldwide no longer rely on human scouts instead use small robots, which can remain almost invisible to the enemy.

“The Europe military robots market is projected to grow at the highest CAGR during the forecast period.”

The Europe military robots market is projected to grow at the highest CAGR from 2020 to 2025. The growth of the market in this region can be attributed to the increasing deployment of UAVs for surveillance, robots for coastal patrol and mine detection & clearing activities,  the use of unmanned ground vehicles to assist soldiers among others. Russia, the UK, France, and Germany are key countries using military robots to a large extent.