December 14, 2020 – Witty, blighted characters and an unexpected ending make for an entertaining tale in David C. Fitch’s newly released fiction, “Mental Telepathy Affair Diary or Tides of Fate”. As the title suggests, this is a story woven around telepathy, and how unpredictable fate delivers many strange blows to tear many lives apart. Will these characters be healed and mended again forms the crux of the novel. 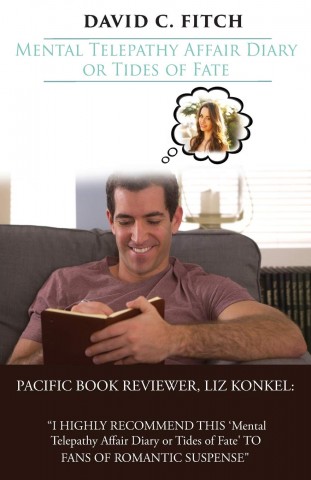 Stock broker Mark Ingersol has mental telepathy powers, and so does his new love, Lauren Morgan. Mark had a divorce with his wife Sandra, whose personality underwent a change after a heart transplant operation. After losing his job to drinking, Mark ends up in Rikers Island prison for twenty days. He undertakes to restore his good life by quitting alcohol, and continues to pursue Lauren, though she now has a new man in her life.

Several interesting facts make this novel a great read. The mental telepathy conversations are riveting, and can even happen across continents. The personality changes of Sandra, from a soft spoken and well-mannered wife to a yapping, cigar smoking and swearing tom-boy is funny beyond comparison.

The inspiration for this refreshing piece of writing comes from direct experience of working at Broadway. The author assisted a stage producer, and did not forget to take ample notes on characters and situations that he liked. A large chunk of these engaging story elements finds a place in the new novel.

David C. Fitch is a veteran, having served in the Canadian Army for six years during World War II. He survived a torpedo attack on the ship he was stationed at during the battle of Britain, an attack that killed 75 percent of the crew on board. Born in Montreal, Canada, David grew up as an avid swimmer, winning the Montreal 1-mile Open Swimming race in 1940. After the WW 2 he lived in New York city for over 50 years working as a Controller at Tectonic Environment as well as an architecture firm and turning his hand to writing, after which he retired in Glens Falls, NY.”  His influences include James Norman Hall and Charles Nordhoff, authors of “Pitcairn’s Island.”

“Mental Telepathy Affair Diary or Tides of Fate” by David C. Fitch is available from Amazon in Kindle and paperback editions.

GOLDTOUCH PRESS, LLC is an established and experienced group of various publishing houses who teamed up to bring their clients accessible and competitive author services.