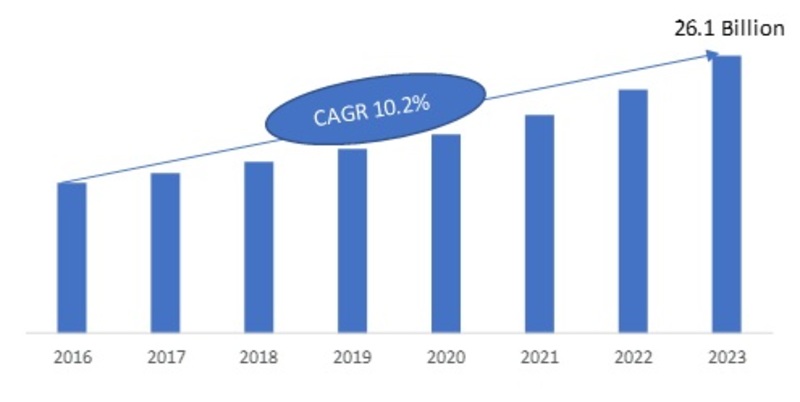 The MEMS and sensors market is ascending at a fast pace owing to the increasing demand for IoT technology and the mounting adoption of connected devices. MEMS sensors have extensive applications in wearable devices and consumer electronics such as smartphones, laptops, tablets, digital cameras, portable media players, and navigation devices. Moreover, the MEMS have found a wide scope of application in several end-user industry verticals including healthcare for several applications such as imaging applications, for diagnostic and treatment equipment positioning applications, and medical devices such as bionic limbs and other artificial body parts.

Building automation is one of the latest applications of MEMS and sensor technologies. It has gained considerable popularity among the customers and is anticipated to favor the growth of the market. Sensor technology is likely to revolutionize the future trajectories of end-user industries. For instance, the drastic growth in the demand for autonomous cars is expected to exhibit an upswing in the foreseeable future.

According to Market Research Future (MRFR)’s report, the global MEMS and sensors market is expected to expand at a CAGR of 10.2% CAGR over the forecast period 2018 to 2023. Its valuation, as per MRFR’s analysis, is projected to reach USD 26.1 Bn by the end of 2023. The rapid adoption of connected devices for enhancing efficiency and accuracy across almost every industry vertical is anticipated to expedite the growth cycle of the market.

The market is prognosticated to attract new entrants and a massive inflow of investments. The future trajectory of the MEMS and sensors market is expected to be boosted by the large-scale adoption of the technology across the technologically underdeveloped industries.

The global MEMS and sensors market is segmented by material, types, application, and region for gaining insight in deeper trends and better decision-making. By application, the global MEMS and sensors market is segmented into healthcare, consumer electronics, aerospace and defense, industrial, and automotive. The MEMS accelerometer sensors are commonly used in electric devices like laptops and smartphones. The accelerometers are integrated in laptops owing to its capability detection of sudden free fall and immediately turn off the hard drive to prevent damage. These accelerometers are integrated in smartphones for the provision of various features like image stability, menu navigation, text scroll, silent mode activation, shock detection, and motion dialing.

The global MEMS and sensors market, by region, has been segmented into North America, Europe, Asia Pacific, and the Rest of the world. North America is the hub of technological innovations. The region is not only quick to adopt new technologies, but it also pioneers the development of technologies. In addition, the rapid developments in the sensor technology coupled with its widening range of application across different industry verticals are responsible for the growth of the MEMS and sensors market in the region.

Europe, too, has been projected to accelerate the adoption of MEMS and sensors in various sectors of the economy. The strong value maintained by the automotive industry is also anticipated to act as a catalyst to the growth rate of the booming market. In addition, the region is projected to witness a surge in demand for robot cars which is likely to help the expansion of the MEMS and sensors market in the region.

Asia Pacific is presumed to retain its control over a significant share of the global MEMS and sensors market over the assessment period. The Chinese government is endeavoring to revolutionize its transportation industry to control its carbon emissions. This, in turn, has led to an increase in demand for vehicles equipped with smart and intelligent sensors.  In Addition, the region has developed a penchant for smart consumer electronics which is expected to augment the MEMS and sensors market in the forthcoming years.

In January 2019, the officials of the city Elgin have voted in favor of the approval of new technology of “Smart Parking Sensors.”

In January 2019, the U.S. has announced its plan for the expansion of its missile defense which will be relying on a new generation of space-based sensors.

In January 2019, the automotive supplier Brose has collaborated with sensor specialist Vayyar for the development of sensor technology for door and seat functions.

In January 2019, Apple, the U.S., has expressed its interest in the purchase of Sony’s next-gen 3D sensors for the successors to the iPhone XS and iPhone XS Max.

In January 2019, Sony, the multinational cooperation has announced its plan of becoming the supplier of the next generation visual processing chips for the new 3D sensors for professional DSLRs, smartphones, and cameras.

2 Scope of The Report