Most have heard the story before. A young Australian boy achieves entrepreneurial success in the online business space. Just over 14 years ago, Ruslan Kogan founded one of the biggest e-commerce stores to date.

Three years after graduating from University, Ruslan founded and became the CEO of Kogan, establishing an e-commerce empire. Soon after, Ruslan Kogan expanded Kogan into the retail, marketplace, internet, and insurance company.

Fast-forward to February 2019, and Marcus Pereira, another Australian, hits his first six-figure store from his e-commerce store. Except Marcus hadn’t even graduated from high school. He was still in his senior year at just 16-years-old. 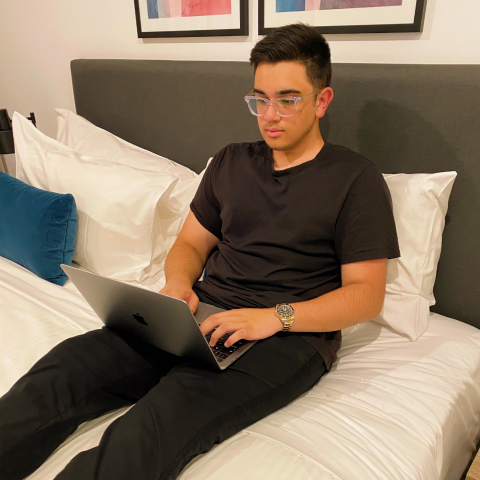 He went from launching his first e-commerce store in February 2019 to over $100,000 in revenue in August 2019, just six months later, marking his first six-figure month in income.

But his story doesn’t start there. Marcus claims his success is due to his work ethic at a young age. While most 16-year-olds were playing Fortnite or Call of Duty after school, he was working on his businesses and educating himself.

Throughout middle school, Marcus established and ran a YouTube channel, focusing on creating viral videos and in-demand content. He scaled the channel to over 6,000 subscribers and made money along the way before retiring it.

A few years later, he began creating Instagram pages that would focus on a specific niche. He saw that there were other accounts creating six-figures in income, and Marcus wanted to be a part of that.

After growing out his niched pages to a larger audience, he began selling promotions to branded companies. He noticed that these stores had been selling products directly from China and marking up the price.

After conducting more research, Marcus identified that these companies were running a drop shipping business – selling a product on their store and shipping it directly from China to the customer.

One year later, at 15, he decided he would try out e-commerce for himself with his own drop shipping business. This time, he would be the one buying shout outs from influencers and Instagram pages like his own.

During his experience running an e-commerce store, he realized that the costs of advertisements, fees, and Shopify costs were high for his budget.

Marcus realized he had to open a new business to cover the funds of his Shopify store. He started selling products on eBay. He would source them from local retailers and list them on his eBay store for a marked-up price.

He continued to scale his eBay business and hit over $360,000 in sales in under a year. He used the profit from his eBay store and invested it into his Shopify business.

He worked non-stop for the next few months scaling his eBay store to bring in more revenue while building his Shopify store on the side.

“I honestly didn’t expect much. I would have been happy with even making $500 in my first month.”

In December 2019, he had scaled his eBay business to such a substantial level that it was doing over $30,000 a month. He continued to focus on this business model, but by the end of 2019, he had launched his Shopify store.

Entering 2020, Marcus had multiple businesses running, bringing him several streams of income. His primary income was from eBay, but he was continuing to make income monthly from his Instagram accounts and his Shopify store.

“It was amazing. I could not believe it. It changed my life from then on. I’ve never seen these kinds of numbers. I figured $25,000 was a huge blessing, but there’s no way that this e-commerce thing can be sustainable. But when January came around, I did another $30,000 in revenue.”

As he progressed through the months, Marcus picked up a few skills in internet marketing, specifically Facebook advertisements. He knew that this was the future of his e-commerce store and that ads could help scale his business to six-figures per month.

Marcus utilized these skills to grow his store and now runs both his eBay and Shopify drop shipping businesses.

Marcus attributes much of his success to watching YouTube videos of online business owners when he was younger.

“Growing up, I always loved watching these types of videos where people ran their businesses and showed how. It inspired me and made me want to follow in their footsteps.”

Now, Marcus is teaching others how to build their profitable drop shipping store through his YouTube channel and Instagram page.

“If I hadn’t watched these videos when I was younger, I don’t think I’d be where I am today. I owe everything to those entrepreneurs who taught me, and I feel like it’s my duty to do the same.”

Marcus also offers courses on e-commerce and Instagram marketing to teach people, step-by-step, how to start their businesses, and follow the footsteps Marcus took.