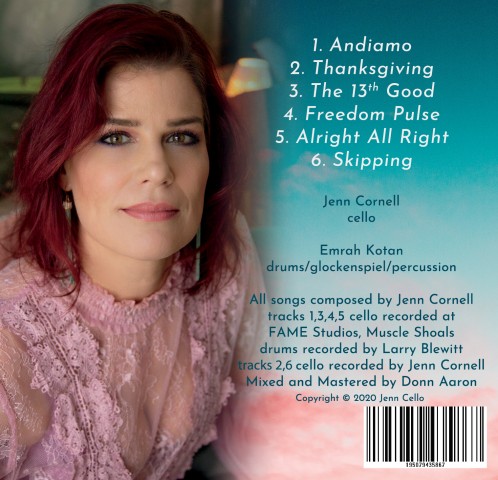 Jenn Cornell is passionate about playing cello, so much so that she would have recurring dreams about playing cello, hearing sounds that she never made in real life. She started having these dreams while studying music in college and she would wake up with an amazing feeling of freedom and vitality. “Once I had the taste of freedom on my cello in my dreams, it changed my whole approach to music forever”, says the artist. Chasing that enthralling feeling of freedom, she created her latest album “Freedom Pulse” composed of six enticing tracks including the title track “Freedom Pulse”, Alright All Right”, “Andiamo”, “Skipping”, “The 13th Good”, and “Thanksgiving”.

Jenn started playing cello in her School’s Orchestra and instantly fell in love with it. She started with touring and recording in collaborative projects but eventually discovered her sound as a solo artist. She went through a rigorous audition process and won a position performing at the Atlanta airport. Initially, she found the gig hectic, but soon discovered the bright side of it — meeting new people, and being appreciated by them. And this is where she finally executed the idea of ‘finding freedom’ through her latest album “Freedom Pulse”, which she refers to as ‘a celebration of being alive and human connection’.

The amazing experiences she had and the people she met while regularly performing at the Atlanta airport also influenced the project to a great extent. “When people took the time to stop and listen, I got to connect with people and those people to each other. It was a magical place of discovery and freedom for me interacting with so many people and forming lasting relationships. Playing there became one of my most fulfilling ways to touch people with music and ultimately led to the making of Freedom Pulse”, adds the talented artist.

Sending a message to her fans, Jenn Cornell states, “The inseparable quality of our joy and sorrow, of our spiritual and animal, is what I believe leads us to be able to experience what it is to be alive. Music is the celebration of being alive. There is a beautiful quote that resonates with me in Kahlil Gibran’s The Prophet: “And is not the lute that soothes your spirit, the very wood that was hollowed with knives?”

Jenn calls her music “Cello Soup”, an amalgamation of her 33 years of experience playing cello. Her musical style sits at the crossroads of Classical Fusion, Rock, World, and Crossover Jazz. Summing up her experience while making the album Jenn further adds, “I feel as if I am the lute that was carved out by the knife and now I get to sing.”

Listen to Jenn Cornell’s latest album on Spotify and YouTube.