Sodium benzoate as preservative is widely used in the food and chemical industries and is sometimes used in cosmetics or skin care products. But is direct contact with the skin harmful? Below, SpringChem will take you on a journey to discover.

Sodium benzoate as preservative has a good inhibitory effect against bacteria and fungi under alkaline conditions and is one of the commonly used preservatives in many industries. The best pH for preserving is 2.5-4.0. At pH 3.5, it has a significant inhibitory effect on a variety of microorganisms; at pH 5.0, the solution is not very effective in sterilizing.

The aqueous solution of it is alkaline and if a small amount is exposed to sodium benzoate, it will not cause more obvious damage to the skin. However, for people with sensitive skin, large amounts of exposure to it or its aqueous solution may cause a certain burning sensation on the local skin, and may even cause varying degrees of local skin redness, heat, itching, rash, or even ulceration and other damage, and in severe cases may cause burning skin pain.

Sodium benzoate is also cytotoxic and may cause cell membrane dysfunction, and cell rupture, resulting in disruption of cellular homeostasis mechanisms, and may even cause cancer with prolonged exposure.

Effects of sodium benzoate on the skin

The maximum permitted addition to cosmetics is 0.5% and is a permitted preservative for cosmetic use in the Safety and Technical Specification for Cosmetics 2015 Edition in China.

Sodium benzoate has a certain effect on the human body, but the simple use of skin care products, such as hand creams, cosmetics, barrier creams, etc., only through the external application of skin generally does not affect the human body, do not worry too much. It is also advisable to avoid using too many skin care products on a daily basis if you have allergic skin conditions or if you have poor skin.

Although sodium benzoate safe to the skin, when mixed with vitamin C, it can produce the human carcinogen benzene. If you are using vitamin C skin care products, try not to overlap them with other substances so as to avoid damage to your skin.

Sodium benzoate can also be used as a preservative in liquid pharmaceuticals for internal use and has the effect of preventing spoilage, and acidity and extending shelf life. When small amounts of it enter the body, they are metabolized and do not cause damage to the body. However, excessive sodium benzoate taken internally over a long period of time can damage the liver and even cause cancer. Many people ingest too much, which can penetrate deep into every tissue of the body through the patient’s pores, so long-term consumption can lead to cancer and is highly dangerous. Concerns about its toxicity have limited its use in recent years, and some countries such as Japan have stopped producing sodium benzoate and have placed restrictions on its use. 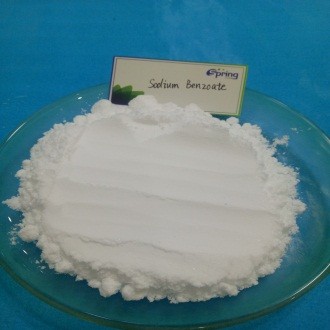