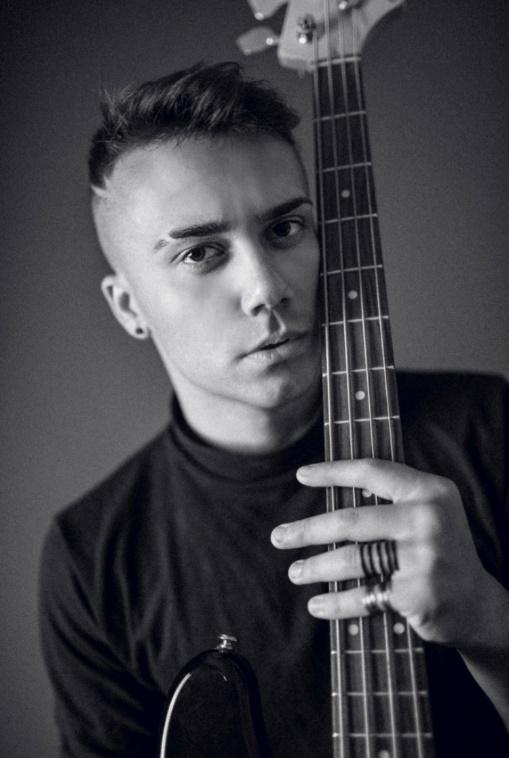 Born in Kocani, north of Macedonia, singer, songwriter, producer, and multi-instrumentalist Nickarth transcends culture and genre with music that will definitely resonate worldwide.

He started the classical guitar at age of 14 and was one of the contestants of the Junior Eurovision Contest 2011. He won second place. The money he earned was used for his first voice lessons.

In high school, Nickarth attended Sergej Mihajlov Music & Art School where he studied classical music, mastered the classical guitar and Macedonian Ethno instruments. After art school, Nickarth flew away to United Kingdom (Brighton) staying there the next 2 years of his life. He worked as a waiter and male nurse. Staying true to his plan, his purpose was to learn and find out more about music production, the music business and U.K Music Scene.

He came back to his homeland May 2018 and started to work on his music career from scratch. It was during these two years (2018 & 2019) that Nickarth composed and recorded approximately 40 songs, including, “Faith” and “I Only Care If You Too” written about a girl he was dating that time.

2020 is promising year for Nickarth as he plans to release loads of new music and content for his fans.

McCaffery Media caught up with Nickarth to chat about the upcoming E.P, his favorite track, and who he wants to collaborate with in the future.

Hey Nickarth! How have you been lately?

I am feeling great today! Woke up early and got some work done. I always say to myself that small tasks are the key to maintain gratification. Thanks for asking.

You’re welcome! Are you working on your E.P? Tell us more about it.

Unfortunately, my E.P got delayed for a while as I changed the whole concept of it. It will probably be out in few months from now, but I can’t promise as I got a huge major record label interested in my music. The music in this E.P is essentially important to me and I think about it as the best thing I produced and wrote ever. Expect something huge!

If you had to pick a favorite track from your E.P, which one would you choose?

The thing with me is that I really love all the stuff I put out. So, I really can’t point out a favorite song but I might say that I am really proud of the first two tracks on the E.P. The first one is called “I’m okay” co-produced with Alex Fyock a.k.a James the Bear and the second track “You” which is a part of a trilogy included in the E.P.

I’d like to think that these two will have their moment in the sun soon.

If you could pick anybody to collaborate with, who would you pick?

I would definitely pick Dennis Lloyd, Two Feet and Charlie Puth because they have influenced me the most in many particular fields such as songwriting, audio production and singing. I won’t say that I sound exactly like them, but I am eager to improve my audio production and get myself to the same level like them.

When you need a bit of motivation or even inspiration, is there anything or anyone you go to?

When I’m lacking inspiration, I usually read a book, watch some documentary about other artists or I will just talk to my father (Billy Esteban, owner of the Cafe De Anatolia), he always has the right words to say when I need them most and it keeps me going. In terms of places, I love to spend my day walking around my hometown Istibanja, just to clear my thoughts.

Tell us more about your past UK & Europe tour experiences. What was your best memory?

Before I went off to UK, I was actually playing a lot of gigs in my homeland (North Of Macedonia). I have been playing in small venues since I was 17 with at least 4 gigs weekly on my tour schedule.

When I moved in in Brighton, I started to do gigs as a solo artist. Usually during the weekend, I will end up playing few shows in Revolution Bar, Crowns Pub, World’s End, Brighton’s Brunswick, The Mesmerist, Twid (London) and many more. There were many interesting moments there but if I have to choose, I will definitely go with the day I went on an X Factor Audition and passed the first round. The journalist who was present during my performance really loved my way of singing and performing so he wrote an interview about me for Argus. The next day many people followed me on socials and started to listen my music. I decided to not attend the 2nd round of X Factor as I never considered myself as a cover artist.

Link of the interview: https://www.theargus.co.uk/news/15149737.singers-hope-to-show-they-have-x-factor/

You’re setting off on your first EUROPE & UK tour next year! What are you most excited about?

About everything. Honestly, I have never been on a tour before in other countries except UK and North of Macedonia. Now I already got some dates fixed as a support artist to some popular artists and bands.

What can fans expect throughout 2020?

Next year I am only focusing on my music! Just so you know, loads of new music with good music videos are ready to come out. The small Europe Tour and some festivals are on the list too. I feel like 2020 is the year I have been waiting.

Finally, do you have any goals to complete before this year ends?

To be honest there are few goals I have left this year. First one is to stay true to myself, do the work and maintain happiness. My family and the music are the two things I am only concerned about.

More dates up to come.