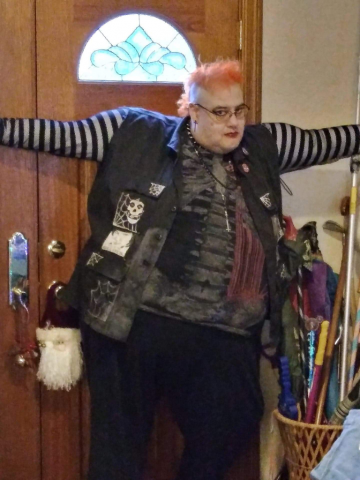 Lipstick & Cyanide are the brand new Goth/Industrial band from Newark, CA. They have already started to grab attention with their recently released tracks like “The Bridge”, “Guinea Pigs”, “Kill for peace”, and “Totentanz”. The high-quality sounds, production quality, and lyrics that tug the heartstrings of the listeners makes the band stand out. The band is currently working on their full-length LP and scheduling for various live shows across the cities.

We got in touch with Dean Ricks, who prefers to be known as “Ghoul” from the band Lipstick & Cyanide, to know more about their journey and upcoming projects.

Ghoul: I was born in Palo Alto, California and never really left that geographical area. So I’ve always lived in the SF Bay Area. I discovered music at an early age as my father was a professional musician before joining the electronics industry. Growing up, I was really into hard rock, but got my mind blown when I bought a copy of ‘All For One’ by Raven. It was my first exposure to the underground scene. I dove in head-first and never looked back. From metal, I discovered punk rock. And from punk, came the discovery of goth and industrial music.

Ghoul: There’s no easy answer to that question. The instant I heard rock music on the radio, I wanted to create music. I’ll share something with you, though. The music moment that most affected me in my life was this:

I was maybe four or five years old and it was way early in the morning and I was the only one awake in the house. I was in front of the TV and turned it on. The screen showed a stage… and this man standing on it. He announced that he was going to sing a song called ‘With A Little Help From My Friends’. And his voice… my God, his voice… It touched me deep in my soul. And I wanted to sing like him. With that same passion and emotion in my voice. I didn’t find out until years and years later that the stage was Woodstock and the man on the stage who’s a voice so moved me was Joe Cocker. Maybe that’s who really, really inspired me to create music.

Interviewer: Describe the kind of music you create?

Ghoul: My music has the same vibe and energy that the original 80s goth and industrial bands conveyed. That feeling of graceful darkness… sounds that evoke mental images of gothic cathedrals, overgrown graveyards, and images like that. In short: darkness with a groove. When in doubt, refer back to The Sisters Of Mercy and Skinny Puppy.

Interviewer: Tell us about your journey so far.

Ghoul: I’ve been composing and creating music since I was 13. My first serious instrument, like everyone else, was a guitar. Bass guitar and keyboard followed soon after. But it wasn’t until *very* recently that I had the ability to *really* create my own music like I’m doing now. And that’s due to the newer Digital Audio Workstations like Propellerhead Reason and/or Reaper. As far as my foundation? One word: Punk. Punk is my emotional foundation, moral compass, and artistic guiding light. I discovered the alternative music scene at 13 and never looked back. I went from thrash/punk to goth/industrial as a matter of progression. But I still consider myself a punk. I always will.

Growing up, my parents weren’t really around. So, I got my moral compass from bands like Crass, the Dead Kennedys (ESPECIALLY Jello Biafra), the Subhumans, etc. If it wasn’t for the alternative culture scene, there’s a very good chance I would’ve been dead at 16, no joke. I discovered goth in the 90s. I was looking for something different and needed a place to be to avoid being at home. When I discovered the goth scene, I almost immediately fell in love. The fashion, the music, the culture… I loved everything about it.

Interviewer: Who are the other members of your band?

Ghoul: Right now, there’s only one other member: Reverend Poison. That’s the person who handles all the drums and electronics you hear in the music, while I handle all the guitar duties.

Ghoul: As stated, we’re currently working on our first full-length album as we speak. After we get that done, it’s time to start booking shows locally. Even before the album is out, we’re going to be playing shows here and there to give people in clubs the heads-up that we exist. Our live shows are a bit theatrical along the lines of what Ogre from Skinny Puppy does at their live shows. 2020 might be a real good year for L&C. We’ll see!

Interviewer: Are you signed with a label or you plan to be independent?

Ghoul: I *REALLY WANT* to sign with a label if I can. That’s part of the dream. I want to tour, play live, the whole nine yards. And *nothing* would make me feel more like I was a success than being able to say that I’m signed up with one of the biggest names in the game.

Listen to all songs by Lipstick & Cyanide on this LINK.