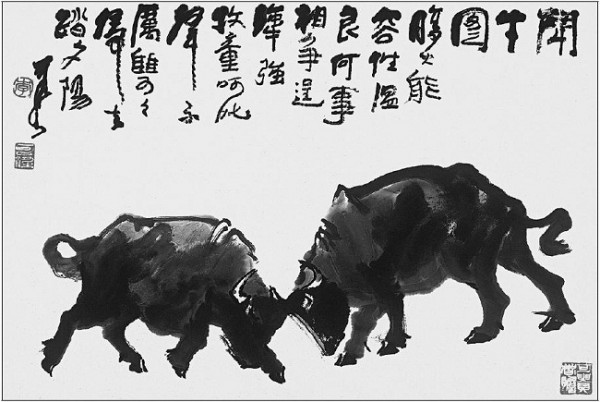 Bull Fighting by Li Keran on display at the China National Academy of Painting in Beijing. [Photo provided to China Daily]

Late modern master Li Keran used to quote the words of Isaac Newton, “If I have seen further, it is by standing upon the shoulders of giants,” as an encouragement to younger artists.

When he was alive, Li often said the process of acquiring new knowledge was like “a relay race” and that future artists would carry on the legacy of classical Chinese paintings just as he had done after carving a name for himself in China’s art history in the latter half of the 20th century.

Li was a pioneer in exploring styles and themes in Chinese ink painting. He developed a school of landscape art to portray the image of his homeland’s mountains and streams, based on extensive journeys across China. He rendered his paintings a touch of historic grandeur, romanticism and spirituality to capture the eyes of people from different walks of life.

Research on Li Keran’s Art, an ongoing exhibition that opened at the China National Academy of Painting in Beijing on May 23, pays homage to his commitment to enlivening the centuries-old visual art tradition. The show is part of celebrations marking the 40th anniversary of the academy. The academy did not specify when the exhibition will end.

Li was 74 years old when he was appointed the founding director of the academy. Before that, he had taught classical painting at the Central Academy of Fine Arts for several decades.

Born to illiterate parents in Xuzhou, Jiangsu province, Li studied at the Hangzhou Fine Art School, now China Academy of Art, in Hangzhou, Zhejiang province. It is a prestigious school that produced many important figures in the country’s 20th century art.

At the school, Li learned oil painting under then-headmaster Lin Fengmian who had studied in France and was devoted to bridging Chinese and Western art philosophies. The training allowed Li to step aside from the rigid rules of classical Chinese painting, which at the time faced a crisis of existence.