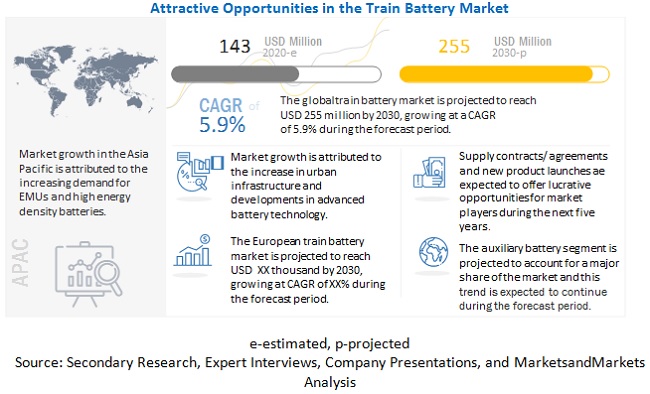 The global Train Battery Market size is projected to reach USD 255 million by 2030, from an estimated value of USD 143 million in 2020, at a CAGR of 5.9%. Rapid urbanization in emerging countries and advanced economies is considered to be one of the largest drivers of infrastructure spending over the next few decades, which is expected to bolster the demand of rail expansion. The incorporation of these developments in urban rail infrastructure is expected to propel the demand for energy storage systems and hence is expected to boost the demand for train batteries during the forecast period.

Demand for rail networks is steadily rising worldwide, particularly in metropolitan areas with soaring populations. Rail transportation is one of the most energy-efficient modes of transport for freight and passengers. The rolling stock regulation aims at the reduction of Particulate Matter (PM) emissions from these engines by as much as 90% and Oxides of Nitrogen (NOx) emissions by 80% when fully implemented. The standards are based on the application of the high-efficiency catalytic after-treatment technology for engines manufactured in 2015 and later. Increasing environmental concerns and energy-efficient transportation has increased the demand for electric rail transportation. Therefore, stringent emission regulations have shifted the focus towards electric rail transport and increased the demand for train batteries. In Europe and North America for diesel locomotives are further expected to boost the demand for electric, hybrid, and hydrogen fuel cell locomotives. These locomotives are expected to require extensive battery storage systems for achieving the required efficiency and thus the demand for train batteries is projected to increase during the forecast period.

Asia Pacific is estimated to be the largest and fastest growing market due to growth in key countries such as China, Japan, India, and South Korea. The rolling stock power conversion systems industry in the Asia-Pacific has witnessed year-on-year growth. Therefore, creates opportunities for the battery manufacturers to develop high density batteries for rolling stock. The region is the leading manufacturer of rolling stock across the globe and is expected to retain this position during the forecast period as it has the largest rail network, rapid urban developments, and government initiatives towards the development of energy-efficient transportation. Additionally, Asian countries such as China is planning to extend the network to 45,000 km by 2030. High-speed trains, suburban trains, and urban transit trains are majorly run in China, which is expected to make the country the leading market for railway batteries. Furthermore, several developments are being undertaken in Indian railways, and fixed a target for the electrification of 7,000 RKM for the year 2020-21. Moreover, the Indian railways target at 100% electrification of routes by 2024. This offers significant opportunities for train battery manufacturers in the coming future.

COVID-19 has severely impacted the rail sector. As per IEA, rail operators lost USD 1.9 billion in revenue in Asia Pacific and USD 2.5 billion in Europe between January and April 2020. Also, social distancing has reduced maximum rail car occupancy and increased sanitation requirements, raising operational costs and reducing profitability. During the lockdown in India, Indian railways, stopped all passenger train services and reduced freight train services to 60% capacity (also due to reduced demand for bulk goods such as iron and coal). Therefore, owing to the stoppage of railway services in most regions, the demand for batteries is expected to witness a downturn.

In Europe, freight rail acted as a key mode of transportation for commodities such as food, coal, and health related materials including medicines, personal protective equipment (PPE) to various areas during the lockdown. Though, the overall traffic was reduced significantly during this period. Therefore, the limited orders for rolling stock across the globe due to the COVID-19 pandemic has affected the demand for train batteries. Nevertheless, due to irregularities in charging cycles and battery maintenance or replacement, the demand for new batteries is expected to increase post the lifting of lockdowns

To speak to our analyst for a discussion on the above findings, click Speak to Analyst