Hereditary Angioedema (HAE) is a rare genetic disorder caused by the deficiency in functional C1 inhibitor (C1INH) that results in recurrent attacks of localized subcutaneous or mucosal edema, most commonly affecting the skin, intestines, upper respiratory tract, and oropharynx

HAE is a heterogeneous disease with complex pathophysiology that involves several pathways resulting in the increased production of bradykinin with mutations of multiple molecules in genetic etiology. These could include the Kallikrein gene mutations; Bradykinin gene or its receptor mutations; Kininase 1 gene mutations and loss of function and mutations in gene encoding aminopeptidase and ACE enzymes.

It is classified into three types based on genetic defects such as type I HAE with low levels of C1-INH in the body, type II with poorly functioning C1-INH, or the recently identified types of HAE with normal functioning C1-INH (formerly known as type III HAE). Identification of the novel polymorphisms in several genes leading to modification in the clinical phenotype of HAE is a relatively recent phenomenon. The clinical features of HAE are recurrent and unpredictable spontaneous edema attacks. Traumas, infections, stress, or medical procedures are potential triggers for HAE attacks, and occasionally, angioedema could be associated with prodromal signs, including erythema marginatum. 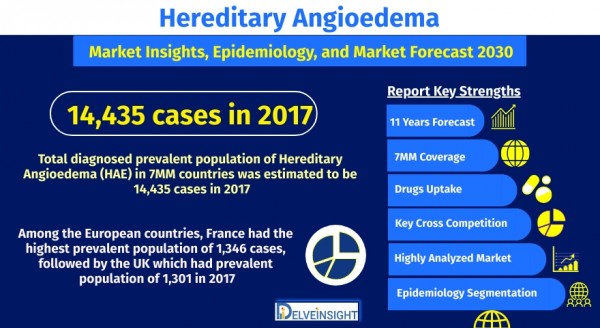 The report provides a detailed current Hereditary Angioedema treatment practice/algorithm, market drivers, market barriers and unmet medical needs to curate best of the opportunities and assesses the underlying potential of the market.

Total diagnosed prevalent population of Hereditary Angioedema (HAE) in 7MM countries was estimated to be 14,435 cases in 2017.

HAE in the US has been observed with the maximum number of diagnosed cases in the age-group 17 to below 65 years, followed by those who belong to the age-group 12 to less than 17 years.

Among the European 5 countries, Spain had the lowest prevalent population with 537 cases in 2017.

The landscape of therapeutic options for patients with HAE has changed dramatically in the last two decades. Ongoing research promises even greater change in the foreseeable future. Given the economic and psychosocial burdens for patients living with angioedema, effective therapies with novel mechanisms will offer more choices for patients and physicians, as well as provide greater flexibility in routes of administration. Owing to the launch of upcoming therapies, market size shall increase during forecast period (2017-2030).

The report gives a thorough detail of Hereditary Angioedema market trend of each marketed drug and late-stage pipeline therapy by evaluating their impact based on the annual cost of therapy, inclusion and exclusion criteria, mechanism of action, increasing patient pool, covered patient segment, expected launch year, competition with other therapies, and view of the key opinion leaders.

Companies are focusing on executing a successful launch that meets the urgent demand for a once-daily oral therapy that will allow HAE patients to live a more normal life. An orally delivered, small molecule offers the opportunity to improve treatment for the disease by making it more convenient for patients to take therapies