The report “Hydroponics Market by Type (Aggregate Systems, Liquid Systems), Crop Type (Vegetables, Fruits, Flowers), Equipment (HVAC, LED Grow Lights, Irrigation Systems, Material Handling Equipment, Control Systems), Input Type, and Region – Global Forecast to 2026″, size is estimated to account for a value of USD 9.5 billion in 2020 and is projected to grow at a CAGR 11.3% from 2020, to reach a value of USD 17.9 billion by 2026. Factors such as the higher yield as compared to conventional agriculture practices, controlled environment farming, and improved yield and higher produce with limited land resources are some of the key factors driving the growth of the hydroponics system market during the forecast period. 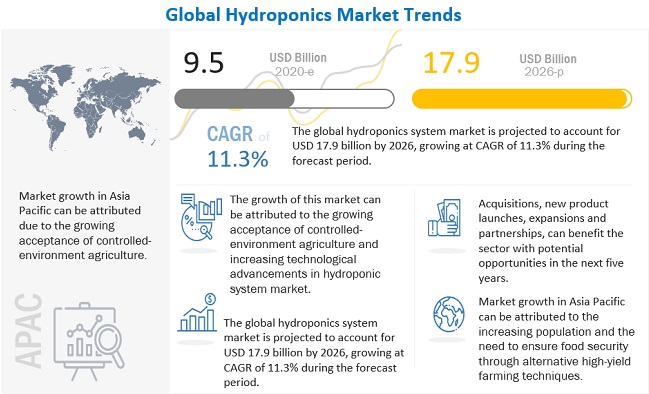 Driver: Higher yield as compared to conventional agriculture practices, emphasized even more after the outbreak of Covid-19 pandemic.

According to the UN reports on global population, plants grown in hydroponic systems have achieved 20%–25% higher yield than the traditional agriculture system, with its productivity being 2–5 times higher. Also, owing to controlled environmental conditions, the effect of climatic changes can be balanced with the help of these systems, thereby not affecting the annual crop production. CEH techniques directly affect the crop harvest cycle. Since climatic changes show a minimal effect on such systems, crops can be produced all year round, thereby again increasing the produce.

Request for Sample Pages of the Report: https://www.marketsandmarkets.com/requestsampleNew.asp?id=94055021

Challenge: Spread of waterborne diseases and algae in closed systems

The nutrients sub-segment is estimated to observe the fastest growth in the by input segment of this market over the forecast period.

As the crops under hydroponics grow without soil, the need for external nutrients is very high for hydroponic-based crops. With the increase in the use of soilless growing techniques in hydroponics, most of the crops are directly grown with the roots in the nutrient medium. This leads to an increase in demand for nutrients in this industry.

The vegetables segment, on the basis of crop type, is estimated to hold the largest share in the hydroponics market, in terms of value, in 2020

The vegetables segment is projected to hold the largest market share in the hydroponic crop market in 2020. Vegetables that can be grown hydroponically include tomatoes, leafy greens, cucumbers, and peppers, which include microgreens and baby greens. Considering the use of the proper system, a wide variety of plants can be grown hydroponically. Vegetables that are grown using hydroponics are known to grow faster and stronger compared to traditional farming as the right nutrients are delivered directly to the plants roots.

The increasing adoption of hydroponics and vertical farming systems in the European, accounted for the highest market share in the region.

Europe has traditionally been at the forefront of implementing advanced techniques in hydroponic smart greenhouse horticulture. Countries such as the Netherlands, Spain, and France have large areas under greenhouse cultivation. However, in the Netherlands, the growers mostly cultivate their plants in simple tunnel-like greenhouses without the use of climate control technologies. Advancement in greenhouse farming has supported the growth of hydroponics in Europe. According to national government statistics, the adoption of hydroponics has been witnessed to be the highest across all European countries. Thus the market is highly developed in the region.