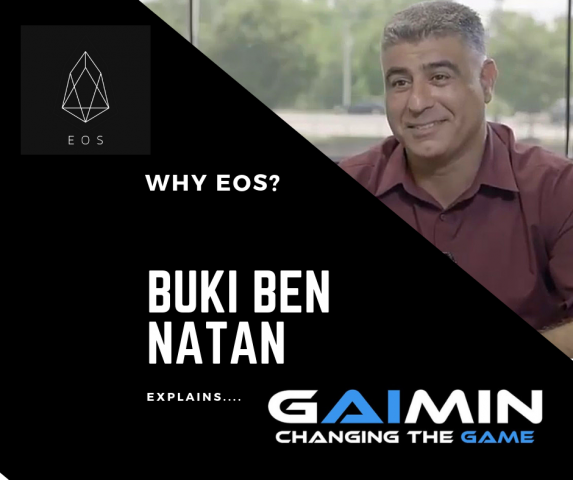 Gaimin.io CTO, Buki Ben Natan has started the Post-Alpha evaluation using EOS protocol on 26 August 2019. He has highlighted the status of EOS being the most active gaming blockchain as one of the keys behind their decision to incorporate the EOS public blockchain into their new, exciting venture aimed to help gamers enhance their whole gaming experience.

EOS leads the way in making actual gameplay more feasible for the average gamer by moving the activity costs onto the DApp operators. When asked directly, he also specifically mentioned EOS technical qualities, such as transaction speed and volume, facilitated by the unique EOS DPoS consensus mechanism, which is predicted to be able to eclipse 3,000 transactions per second.

By default, EOS transactions have no fee, and when you consider the potential of Gaimin.io to generate millions of gamers as users, this is a critical factor. Natan also pointed out the fact that EOS is compatible with C++, which is a very common gaming programming language, and that opens the doors for many possibilities in the future.

Martin Speight, Gaimin.io’s CEO was quick to mention that local universities in Spain had been given grants to focus on the blockchain, coding and programming and that he and their Advisor Enrique Santos had already been involved in meetings to discuss collaboration. “C++ will enable us to work with the universities directly and in the near future have students in our office during their placement year. They will be able to learn from and work closely with some of the top EOS developers in the world. When we were with Phil Mesnier at Object Computing’s headquarters in St. Louis, we discussed him mentoring our programmers. How cool would it be to say that during your industry year, you were mentored by one of the original members of the EOS development team?”

In short, with faster and cheaper transactions, better user experience for its end users – the gamers, easy upgrades and bug recovery, phenomenal throughput limits, massive scalability and a more suitable environment for game developers, EOS is without doubt the ideal platform and natural partner for Gaimin.io.

The Gaimin platform is a powerful yet elegant AI-driven software that aggregates a gamer’s processing power, when not being used and therefore without affecting their gaming performance, to the Gaimin monetization network. In exchange for this the gamer receives purchasing power via the GMRX crypto token, which can be spent directly on gaming purchases. Gamers can now passively monetize their powerful PC resources without the need for any specialized knowledge or action.

EOS.IO is a blockchain protocol powered by the native cryptocurrency EOS. The protocol emulates most of the attributes of a real computer including hardware with the computing resources distributed equally among EOS cryptocurrency holders.