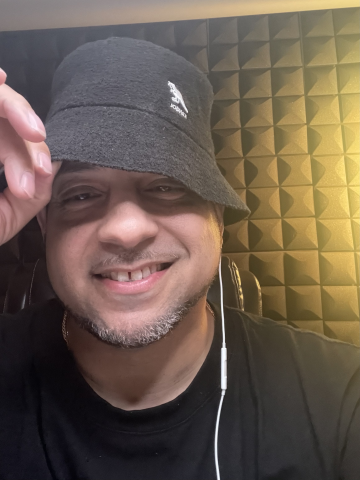 Phillip White also known as Big Phil and ‘Big Phil Speaks’ to the online world is a multitalented Host, Personality, Influencer, Entertainer, Entrepreneur, Online Personality, Blogger and Vlogger who is currently making his mark online via YouTube and Instagram Vlogs, various Live chats, and even through his love for music.

Big Phil Speaks is a father of seven who grew up in a single-parent household with his mother and other family members, including his grandmother, aunts, uncle, and cousins. He was a bright, lively, creative, slightly mischievous youngster who was ALWAYS up to something. From a very young age, Big Phil Speaks, was a nice but rambunctious youngster, who left his impression on the hearts and minds of his peers and neighbors, inspiring “the neighborhood”to adopt him.

Big Phil Speaks discovered his love for music early on and excelled at both singing and rapping, frequently coming first in competitions and being featured in shows, among other activities. However, it was Big Phil’s contagious personality and charisma that attracted people to him over the years. It’s often said that “to know Big Phil is to Like him, Love him, or Hate Him,”and that expression is based on the fact that no matter what was happening or what was in style, Big Phil would always be Big Phil—good or bad or neutral. Thus, Big Phil Speaks’ frank personality was created.

Big Phil became a household figure in Hiphop/Rap circles in and around DC. This was a time when rapping was frowned upon in DC—a city dominated by the local music genre, Go-Go Music. However, in the middle to late 1980s and into the 1990s, Big Phil was among the best at it. He had record deals, local television opportunities, and more on the table.

However, in 1990, Big Phil became involved in a murder case during the Crack Era. He went to trial and was found not guilty. It significantly altered him; all offers and transactions dried up as a result of the case, and many so-called friends abandoned him, forcing Big Phil to turn to himself and to God for comfort.

It would be some years later that Big Phil would wake up one morning with the clear vision of becoming a Living Testimony and effecting people towards positive change.

Big Phil has since grown from that scarred young man who lost it all to that case. Today, he boasts a growing presence on social media which is complemented by the rebirth of music for Big Phil Speaks. Presently, big industries, social media icons and celebrities have taken notice of Big Phil. Doors and opportunities are popping up frequently. ”I believe my growth has proven that it is NEVER TOO LATE, as long as youre breathing, keep pushin, and whatever is meant for YOU, IS for YOU!” Big Phil said.

To know more about Big Phil, Check out more of what he does on Instagram and YouTube @bigphilspeaks.