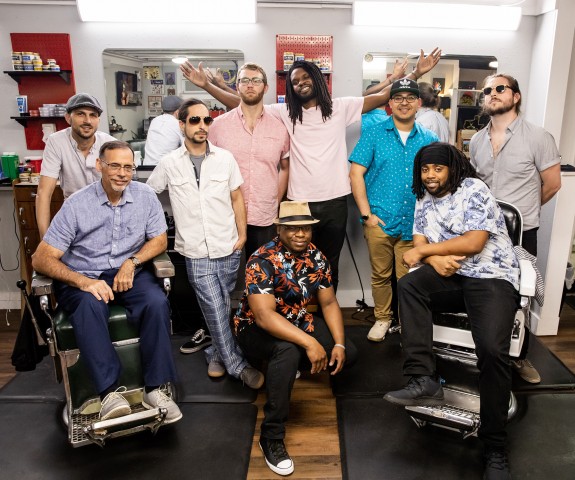 Originally known as Mama K & The Shades, the band was formed by David McKnight and Kelsey Garcia in 2014 and later added more members. “Honey Made” gained rapid popularity for their foot-tapping R&B numbers and live performances, captivating the audience in their magical voice and instrumental sets. From facing the tragic loss of one of the founding members to getting back up again with more amazing music, the band’s story will inspire a lot of artists out there.

In this exclusive interview, Donald McDaniel, the trombonist, and spokesperson for the band talks about the journey of the band so far, and their upcoming first studio EP release on April 3rd.

Interviewer: Let’s begin by talking about your role in the band “Honey Made”.

Donald: I am the trombonist in the band. In addition, I have done a lot of the booking for the band beginning in 2019. I am a CPA by training and also manage the finances, accounting, taxes, legal issues and digital distribution of our music, Lastly, I have been coordinating the publicity and marketing for the band.

Interviewer: Will you briefly describe the journey of “Honey Made” so far?

Donald: Honey Made has been on quite a journey. Our roots were as a band called Mama K & The Shades that formed in the summer of 2014 by David McKnight and Kelsey Garcia. David was an established musician having played with Black Joe Lewis and the Honey Bears. Kelsey was less experienced but the two clicked and began writing and playing out. I joined the band in the fall of 2014 along with Joseph Morrow (trumpet). Key members added in the summer were Willie Barnes II, Chris Barnes (drums) and Lee Braverman (bass).

The band began steadily playing gigs and really took off in 2015. Mama K was selected to play the Wakarusa Music Festival in early June 2015. We were really making happen as a band then we lost David McKnight on June 27, 2015 after a gig in San Marcos. However, we quickly determined to continue playing as a band.

Our story was picked up by Deborah Sengupta Stith of the Austin American Statesman. She followed us as we continued to gig in 2015 and went into the studio to record our debut album titled “Honey Made” in the fall of 2015.

In March 2016 we released the record “Honey Made” (now the name of the band). In addition, we were the March 2016 artist of the Month for the Austin American Statesman. We continued to be very busy the rest of 2016 and into 2017. We were an official SXSW 2017 artist. We were also an official SXSW artist in March 2018.

As described above things collapsed as we went into the studio in the fall of 2018 and the loss of Kelsey Garcia (Mama K).

That led to the rebranding effort in 2019 including the release of our singles “Perfect Getaway” and “Do Ya?” We released our first music video featuring “Do Ya?” in December 2019, We also released our single “Ashy Pockets” in February 2020.

We entered 2020 with lots of momentum, We were named as an official 2020 SXSW showcasing artist before it’s cancelation. We continued writing and planned the release of our first EP “Couple Few” on April 3 2020.

Interviewer: How did the death of David McKnight impact the band?

Donald: The loss of David McKnight was devastating but also a source of inspiration. Looking back and reflecting he was our North Star. His loss hardened our resolve to be successful and fulfill his legacy.

Interviewer: How did you come up with the band name “Honey Made”?

Donald: With the tragic loss of David McKnight in 2015 and the untimely departure of Kelsey Garcia in 2017 we took the time to heal as a band and think about our future and we changed our name to honor David. David always referred to great music as “honey made,” which is why our debut album featured that title. As we considered how to move forward producing new music we knew we had to emerge stronger than ever and keep his legacy alive as the newly named Honey Made.

Interviewer: Tell us about your best work so far.

Donald: Our best so far in many respects is our newest single “Ashy Pockets” which is our first West Coast hip-hop track. However, we also love our singles released in 2019 including “Perfect Getaway” and “Do Ya?” “Perfect Getaway” was actually featured by the UK blog the ANR Factory. Also don’t miss our music video of “Do Ya”.

Interviewer: Tell us about your upcoming EP?

Donald: Our soon to be released EP bridges our music from Mama K & The Shades to the present Honey Made. The first two tracks “Honey Made” and “Like a Fool” were originally performed by Mama K. The song “Honey Made” serves as an introduction to the band (previously titled “The Shades”). “Like a Fool” is the story of a guy that puts his heart in the trust of a girl only to be rejected and to feel “Like a Fool.” The other three tracks are the previously released singles by the band, This EP showcases the musical diversity of the band that displays the RnB sound of “Like a Fool,” to the west coast hip-hop vibe of Ashy Pockets to Memphis soul sound of Do Ya? not to mention the funk elements of “Honey Made” and the jazz elements of “Perfect Getaway”.

Donald: Website is really excited about our full-length album titled “Brand New” to be released this summer. It is produced by Steve Berlin of Los Lobos and features ten tracks of ordinal music. This record continues to display the musical diversity of a band that refuses to be defined by a single musical genre. The title track (“Brand New”) is the continuation of the story started by “Like a Fool” that states what it feels like to find that special girl that makes all things “Brand New.” The title also speaks to Honey Made’s future that is also “Brand New.”