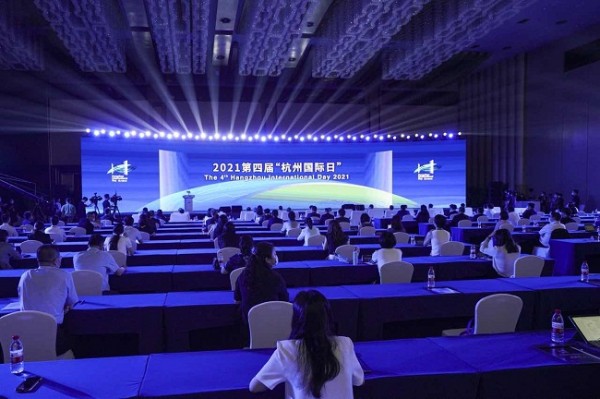 Guests attend the fourth Hangzhou International Day, which was held in Hangzhou on Sept 5. [Photo by Fa Xin for chinadaily.com.cn]

Liu Xin, mayor of Hangzhou, said at the opening ceremony that the theme of the festival this year is “city” and that Hangzhou welcomes its international friends to share their stories with the city.

Liu noted that Hangzhou is dedicated to growing into a city with a thriving digital economy, beautiful natural environment, profound culture and history, as well as a strong international influence.

The mayor also expressed his hopes that more international friends will live and work in Hangzhou, as well as that more cities will cooperate with Hangzhou.

At the ceremony, Hangzhou signed a memorandum of friendship and cooperation with Montevideo, capital of Uruguay, and Córdoba, the second largest city in Argentina.

The China-Central and Eastern European Countries Smart City Center was also inaugurated at the ceremony.

Representatives of ambassadors to China recorded video messages to express their warm wishes to Hangzhou at the opening ceremony, while Sheikh Ahmad Al Fahad Al Sabah, president of the Olympic Council of Asia, sent a letter expressing hope that Hangzhou will further promote its connection with the world and the OCA.