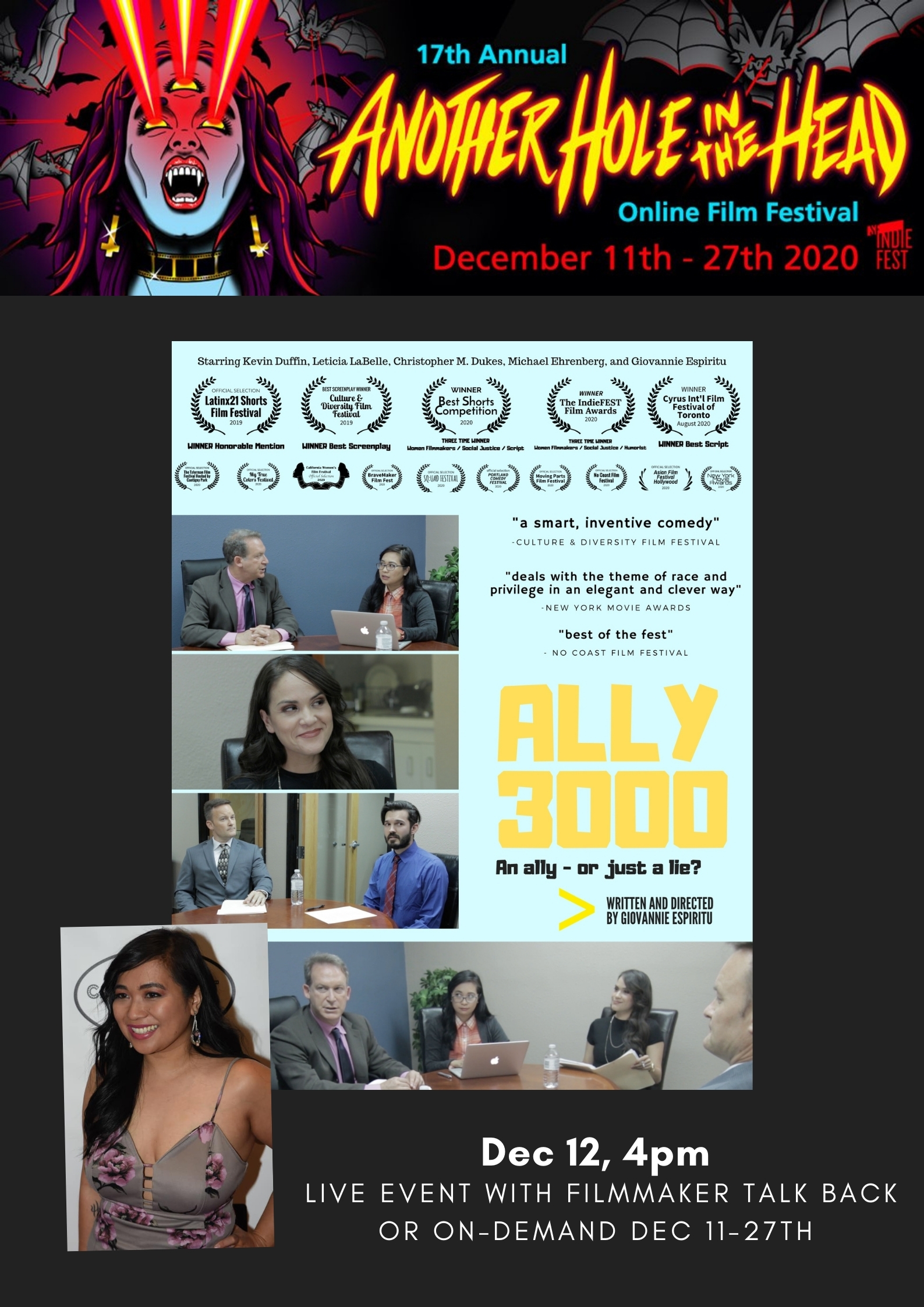 Actress and filmmaker, Giovannie Espiritu, returns to the Bay Area for the “Another Hole in the Head” film festival this week with her satirical short film, ALLY 3000, which she directed and wrote. The film has won several awards internationally on the film festival circuit including several in the categories of Best Script and Social Justice. The Culture and Diversity festival called it “a smart and inventive comedy” and the New York Movie Awards stated it “deals with the theme of race and privilege in an elegant and clever way.”

Giovannie Espiritu, who is known as the genderqueer lothario role of Gin in the LGBTQ series, “Dyke Central” on Amazon, is also a sought after top Hollywood audition coach who started teaching actors in a small one room studio in San Bruno, CA. After the success of many students (including William Lipton of General Hospital fame and the Espina sisters who hosted the Dreamworks show, “Life Hacks for Kids”), Giovannie herself moved down to Los Angeles as the Bay Area rental prices were escalating.

During her time in Los Angeles, she filmed several television episodes (Walk the Prank, Perfect Harmony) as well two movies, a horror creature feature filmed called, “D-Railed” with Lance Henriksen as her boss, and a holiday family drama that just came out recently, “Middleton Christmas,” where she plays the assistant to two time Emmy winner Eileen Davidson.

She also spent her time at the Upright Citizen Brigade immersed herself in the world of sketch comedy and improv. It was there that she learned to channel the micro-aggressions and frustrations that she felt as a woman of color in the industry into the script of ALLY 3000, where the members of a tech company design a product to alleviate white guilt.

ALLY 3000 will be playing in the 4pm show, Dec 12th, 2020 of the Another Hole in the Head film festival with a live filmmaker talk balk. It will also be available on-demand for the duration of the festival from Dec 11-27th. The event, which is normally held at the historic Roxie theater, will be held online due to COVID-19 restrictions.

Actress and filmmaker Giovannie Espiritu was nominated alongside Academy Award Nominees Alfre Woodard and Amy Irving for Best Supporting Actress at MethodFest for the Mynah Films feature film Fiona’s Script. Her primetime credits include a recurring role on ER (NBC), Bones (FOX), Gilmore Girls (ABC), and Trauma (NBC). She can currently be seen as the lead in the Amazon series, “Dyke Central,” which was featured in After Ellen, BuzzFeed, Bust Magazine and Curve Magazine as a top LGBTQ series to watch. As a filmmaker, she was featured in Elizabeth Banks’ WhoHaHa Media for her parody song, “An Introvert’s World,” and her storytelling has been featured in Ms. Magazine. A three-time Outfest Fusion Filmmaker, her short film, “Ultra-Feminist,” was awarded Honorable Mention. Her film, “Ally3000,” just won Best Screenplay at the Culture and Diversity Film Festival (Los Angeles) and the Cyrus International Film Festival (Toronto). It also picked up several awards in the categories of Social Justice / Women Filmmakers / Scriptwriting / Humorist in the IndieFEST Film Awards and International Best Shorts Awards.

She coaches kids/teens online nationwide through HollywoodActorsWorkshop.com and was just named as one of the top 40 Audition Coaches in Los Angeles by the Hollywood Winners Circle founded by Wendy Alane Wright, a top talent manager. Her students are represented by the top agencies in the Bay Area and Los Angeles and notable student alumni include William Lipton (Daytime Emmy Nominee, Cameron on General Hospital) and the Espina Sisters (Hosts of Dreamworks’ “Life Hacks for Kids on the Road”).

In her spare time, she rock climbs and advocates for Domestic Violence Awareness/Prevention and LGBTQ equality. She has served on the Board of Directors for C.O.R.A. (a Bay Area domestic violence hotline and agency) and been awarded a Certificate of Recognition from the Senate for her community service.