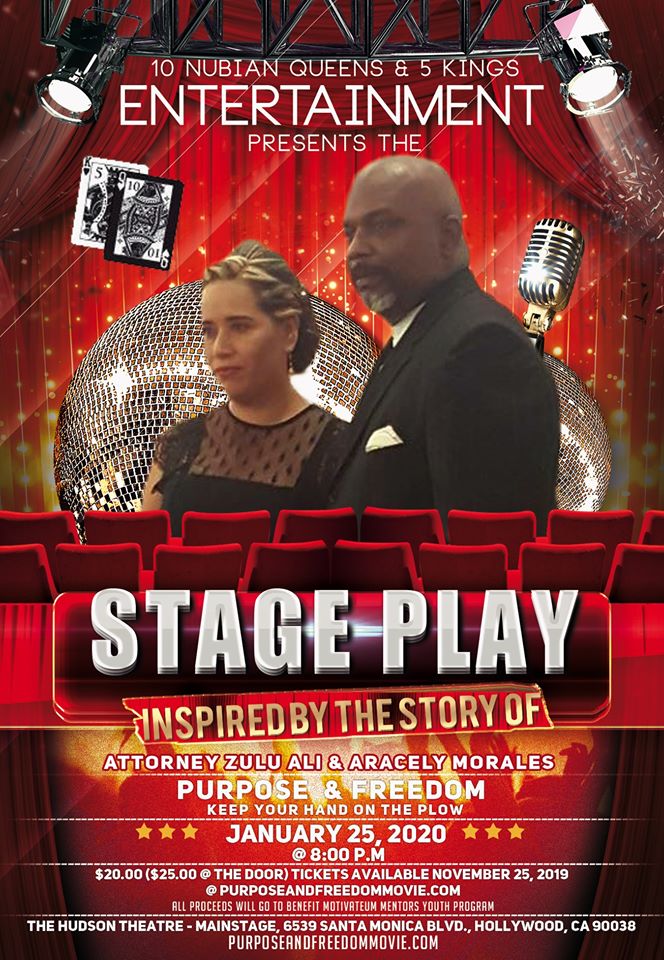 The inspiring story of an illegal immigrant from Mexico. Aracely Morales, and an African American lawyer, Attorney Zulu Ali, is both inspiring and very emotional. Mexican officials brutally abused Aracely Morales, a women rights activist, and she later fled to America looking for freedom in the land of the free, but would then lose her daughter and find herself detained and ordered deported.

The story takes its shape when African American lawyer, Zulu Ali, who in search of his life’s purpose, decided to represent Aracely Morales. The incredible story is the inspiration behind the stage play titled Purpose & Freedom: The Story of Attorney Zulu Ali & Aracely Morales which takes place at The Hudson Theatres, 6539 Santa Monica Blvd., Hollywood, CA 90038, on Saturday, January 25, 2020 from 8:00 PM – 10:00 PM PST. The play is directed by Emily Kluger and produced by 10 Nubian Queens &5 Kings Media.

To book a ticket visit, Onstage41, and EventBrite.

“The journey was a tough one and very challenging, as well. Helping good people who find themselves in difficult situations due to the weakness of our system is a purpose to which I have dedicated myself. When Aracely Morales was detained by the immigration here in the U.S after suffering abuse in Mexico, I thought it would be easy to help her gain her freedom, little did I know it will be a challenging, exhausting and an inspiring story,” says Zulu Ali.

He says further, “I lost faith and confidence in the process at a point, but in the end, it proved right that persistence indeed is a recipe for success. Aracely Morales represents strength, dedication to focus, and the quest for freedom and dignity. I find it fulfilling as a part of her freedom story and bring hope to people out there.”

For more information, visit the Purpose And Freedom Movie Website.

Recognized as a top immigration and criminal lawyer and one of the most influential black leaders in the state of California, Zulu Ali decided to represent Morales during her trial in pursuit of his purpose and he would later lose faith when the case was denied by a mean immigration judge and Morales was ordered deported. The flash of hope emerged as Aracely later won her appeal and regained her freedom, an event that sparked a fresh sense of purpose in Zulu Ali.