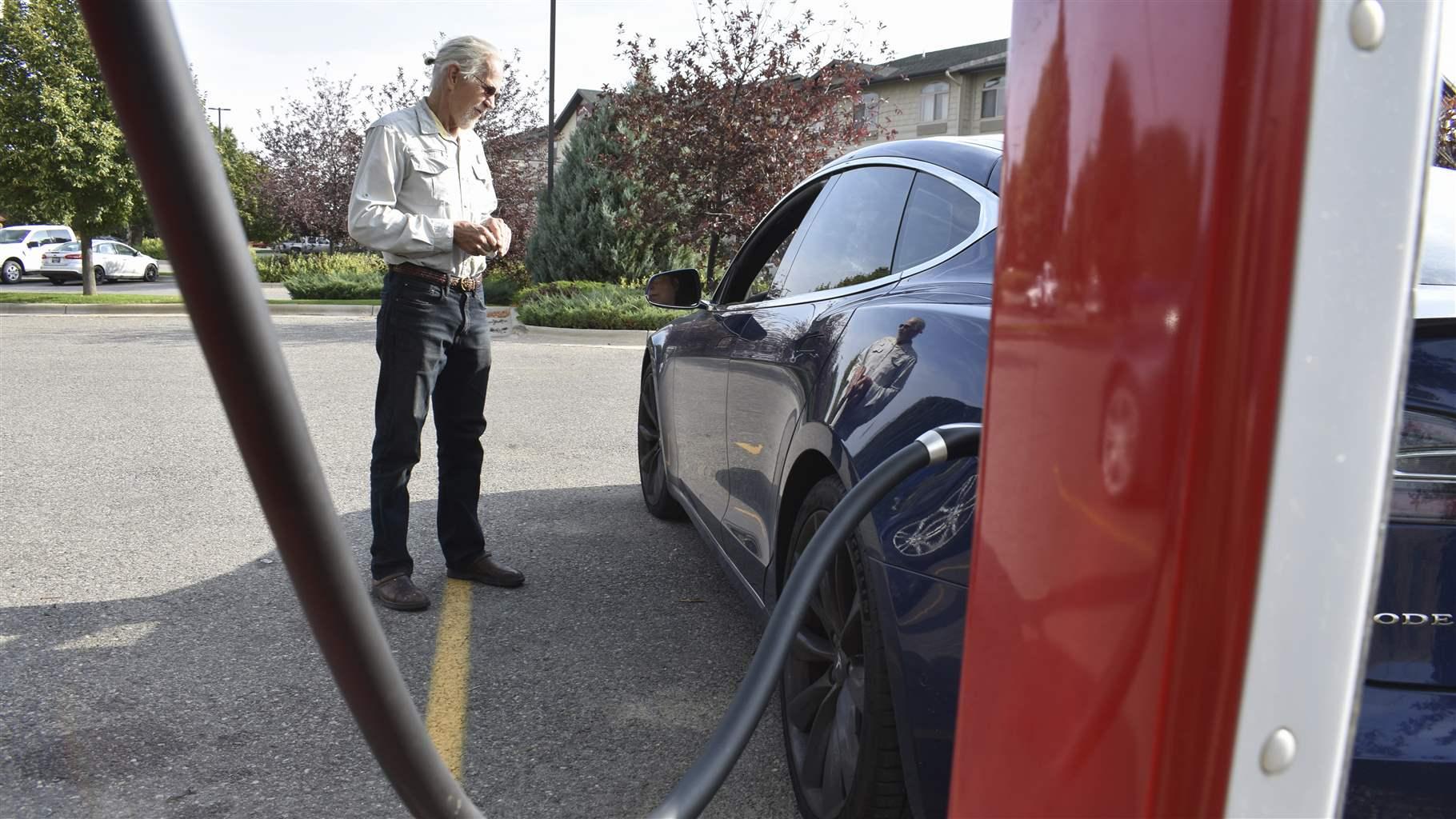 Bob Palrud of Spokane, Wash., speaks with a fellow electric vehicle owner who is charging up at a station along Interstate 90 in September in Billings, Mont. States are planning to use federal dollars to put more EV charging stations along highways to alleviate drivers’ worries about not having sufficient electrical charge to reach their destination.

When Colorado Department of Transportation officials recently learned that their plan to expand a network of electric vehicle charging stations across the state had gotten federal approval, it was welcome news.

It means that Colorado will get access to $57 million in federal money over five years to broaden its EV charging network along federally designated interstates and highways.

“This is the direction of the future. We’re really excited to continue building out our network in all corners of the state so Coloradans can feel confident that they can charge up,” said Kay Kelly, chief of innovative mobility at the Colorado Department of Transportation.

The Biden administration announced late last month that federal officials had given the green light to plans submitted by every state, the District of Columbia and Puerto Rico. That gives those governments access to a $5 billion pot of money to deploy plug-in charging systems for Americans’ growing fleet of electric vehicles.

The funding, which comes from the 2021 federal Bipartisan Infrastructure Law, will be distributed to the states over five years. States can tap into $1.5 billion of it from fiscal years 2022 and 2023 to help build a network of stations along highway corridors that cover about 75,000 miles.

The goal is to create a convenient, reliable and affordable network in which EV charging stations would be available every 50 miles along federally designated highways and within a mile of an interstate or highway exit, according to federal officials. States will determine the exact locations. Each station must have at least four direct current fast chargers. They typically can recharge an EV battery in 15 to 45 minutes, depending on the vehicle and battery.

The program is designed to “help ensure that Americans in every part of the country — from the largest cities to the most rural communities — can be positioned to unlock the savings and benefits of electric vehicles,” U.S. Transportation Secretary Pete Buttigieg said in a news release.

President Joe Biden has set a goal that half of all new vehicles sold in 2030 be zero-emission vehicles. In August, California regulators approved a rule requiring that all new cars sold in the state be zero-emission vehicles starting in 2035. While EV sales have been climbing nationally, they still were estimated to be only about 5.6% of the total new-car market in April through June, according to a July report by Cox Automotive, a digital marketing and software company.

In 2021, more than 2.2 million electric vehicles were on the road, according to the U.S. Department of Energy. More than 270 million cars are registered in the U.S., Federal Highway Administration data shows.

And they say that creating a network of charging stations every 50 miles along the federal highway system will help reduce “range anxiety.” That’s when drivers fear they will be stranded on a long trip because a vehicle has insufficient electrical charge to reach its destination or another charging station. Many newer model electric vehicles typically can travel 200 to 300 miles on a full charge, although some can go farther.

State departments of transportation already have started hiring workers and implementing their plans. They can use the federal funding to build new chargers, upgrade existing ones, operate and maintain stations and add signs that direct customers to chargers, among other purposes.

States can award grants to private, public and nonprofit entities to build, own, maintain and operate chargers. The program will pay up to 80% of eligible costs for the infrastructure. States also must try to ensure equity for rural and poor communities as part of the approval process.

Currently, there are nearly 47,000 charging station locations with more than 120,000 ports across the nation, according to the Federal Highway Administration. Some were built by automakers, such as Tesla. Others were built by companies that make charging networks. Only about 26,000 ports at roughly 6,500 stations are fast chargers, the agency said in an email.

State transportation officials say they want to get new charging stations built as quickly as possible. But supply chain and workforce issues could affect the timing, said Elizabeth Irvin, deputy director of the Illinois Department of Transportation’s Office of Planning and Programming.

In Colorado, Kelly said, officials plan to pair the new federal funding with state dollars approved last year by the legislature. Lawmakers appropriated $700 million over the next 10 years for electrification initiatives, including charging stations.

But not every road in Colorado is eligible for the federal funds, so officials can use the state money to fill in those gaps, she added.

“Between the state funds and the federal funds just approved, we feel like Colorado is very well positioned to build out the charging network,” Kelly said.

The state now has 218 public fast-charging EV stations and 678 ports, and two-thirds of the state’s highways are within 30 miles of a fast-charging station, according to Kelly.

But only 25 of those stations meet all the federal program’s requirements, because many aren’t within a mile of a designated corridor or don’t have enough plugs or power. So, officials plan to use some of the new federal dollars to upgrade, she said.

The state has identified more than 50 places where EV charging stations are needed along the federally designated corridors, according to Tim Hoover, a Colorado transportation department spokesperson. Filling all those gaps would likely bring those roads into compliance with the federal requirements, he said, but Colorado still needs to provide additional stations on other roads.

It’s likely that a big chunk of the new federal money will be spent in rural areas, Hoover said.

“That’s where the big gaps are. Urban areas have a lot more chargers anyway,” he said. “This will be a huge leap forward, so people will have confidence they can travel and are not going to get stuck somewhere without a charger.”

Colorado officials say their plan also will ensure that at least 40% of the benefits from the federal funding go to those disproportionately affected by climate change, pollution and environmental hazards, including people with disabilities, rural residents and historically underserved communities. Those benefits can include improved air quality for poorer communities of color, where many residents live right next to highways, as well as increased employment opportunities and local economic development.

In Connecticut, transportation officials will receive $52.5 million from the federal program over five years. For the first phase, the state wants to build up to 10 locations, officials said. As of July, there were more than 25,000 electric vehicles registered in the state.

“It’s been a priority for DOT for a very long time,” said Connecticut Department of Transportation spokesperson Shannon King Burnham. “If people are pulling off at the side of the road or at a rest stop or gas station, they won’t be spending as much time parked and charging. They can get on their way much more quickly.”

In Illinois, officials will be getting more than $148 million from the federal program over five years. Democratic Gov. J.B. Pritzker’s goal is to put one million electric vehicles on the road by 2030. As of June, there were nearly 51,000 EVs registered in Illinois.

“This is a really important federal program,” said the state transportation department’s Irvin. “We’re really seeing in the next decade a big shift in our transportation landscape to a much more electrified system for vehicles. We want to make sure we do it right.”

Irvin said the state’s first step will be building about 20 stations along its highway network where there isn’t a charger every 50 miles. After that, officials will start putting charging stations in other locations, she said. Currently, the bulk of the charging infrastructure is in the Chicago region.

One priority will be making sure the program benefits disadvantaged communities, she noted. Some of that will be accomplished by improving air quality and ensuring that a diverse workforce is installing and maintaining the stations.

Illinois has 140 public EV charging stations with 642 fast charger ports, according to Irvin. But only 90 of those stations have the type of widely useable charging connectors required for the federal program. The new funding will greatly increase that capacity, she said.

“This program is especially important for people driving longer distances along highway corridors,” Irvin said. “The goal is to build up whole sections of roads so that EV drivers can feel confident that they’ll have places to charge along the way.”