Eosinophilic Esophagitis (EoE), often referred to as “asthma of the esophagus”, is a chronic allergic/immune condition, which tends to reflect many similar clinical and pathophysiologic characteristics as with asthma. It is characterized by the inflammation of esophagus, and hence, termed as an atopic inflammatory disease of the esophagus.

EoE is marked by the presence of Eosinophil, a type of white blood cell, which is typically present throughout the lining of the esophagus (gastrointestinal tract). The production and accumulation of eosinophils may be caused by many factors, such as immune hypersensitivity responses to particular foods or environmental proteins (allergens) in some affected individuals. The symptoms of eosinophilic esophagitis are variable, especially in people of different ages. 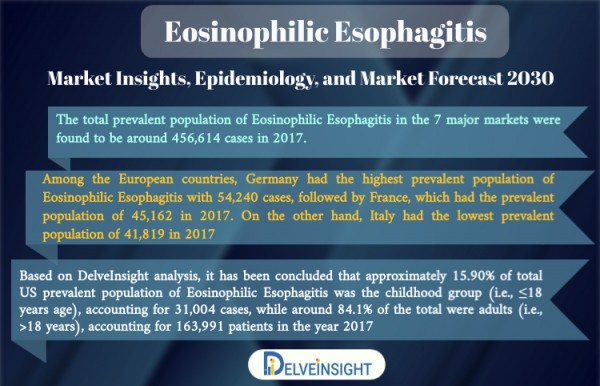 This segment gives a thorough detail of Eosinophilic Esophagitis market trend of each marketed drug and late-stage pipeline therapy by evaluating their impact based on annual cost of therapy, inclusion and exclusion criteria’s, mechanism of action, compliance rate, growing need of the market, increasing patient pool, covered patient segment, expected launch year, competition with other therapies, brand value, their impact on the market and view of the key opinion leaders.

According to DelveInsight, Global burden of Eosinophilic Esophagitis (EoE) has increased over the years. Among the 7 major markets, the United States has reported having maximum prevalent cases of EoE. Though the prevalence of EoE is high across the US, but the condition is often misdiagnosed as other associated diseases such as gastro-esophageal reflux disease (GERD) or Proton-pump inhibitor responsive eosinophilic esophagitis (PPI-REE), ultimately leading to lower treatable pool (when compared to the total prevalent population of the disease) that contributes to the market size of EoE.

It helps to recognize the causes of current and forecasted trends by exploring numerous studies and views of key opinion leaders. This part of the DelveInsight report also provides the diagnosed patient pool and their trends along with assumptions undertaken.

According to DelveInsight analysis, Prevalence of Eosinophilic Esophagitis is higher among men than women.

*The table of contents is not exhaustive; the final content may vary.