Recipient of the Best Action Film award at the Las Vegas Movie Awards, the movie narrates a heart-touching story of a CIA agent’s relationship with a young child against the backdrop of the Russia-Ukraine war. 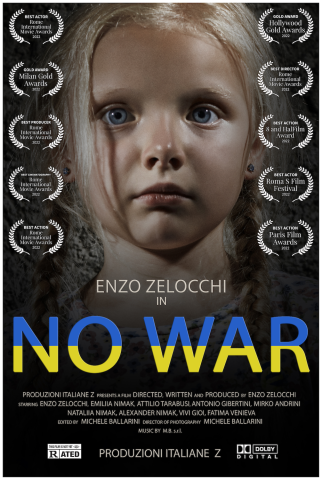 With his new masterpiece, which demonstrates a high level of production value in its stunning drone views and hyper-realistic opening sequence, Zelocchi brings his role to life, leaving the audience emotionally invested in the whole story. It should therefore come as no surprise that “No War” has amassed numerous national and international awards in multiple categories.

The plot of “No War” centers around a CIA contractor who is searching Ukraine for Russian weapons of mass destruction and picks up a young Ukrainian girl along the way after coming across her while battling Russian soldiers. He risks everything to get this little girl to safety in light of the grave circumstances.

The movie ensembles an enviable cast as Emilia Nimak, a real-life Ukrainian refugee, portrays the part of the young girl who draws on her experience when performing. Two actors who bring intense emotions to the movie are Antonio Gibertini and Attilio Tarabusi. According to critics, Michele Ballarini has successfully delivered the message of love and hope in his duties as editor and cinematographer,

Speaking about his new movie Enzo Zelocchi stated, “I consider the project “No War” a miracle! I truly want to thank the entire cast and crew for their hard work and dedication to this project. The awards that “No War” is receiving belong to the entire team.”