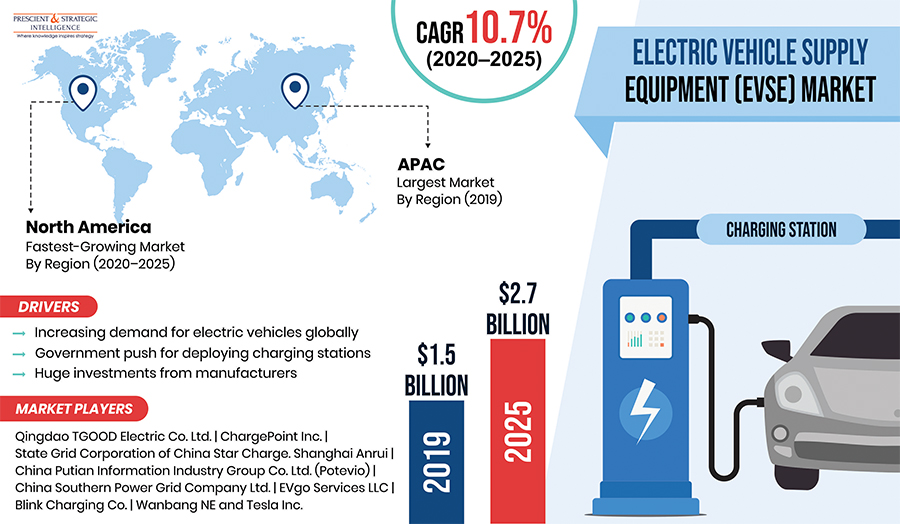 The electric vehicle supply equipment market is being positively impacted by the increasing sale of electric vehicles, investments being poured in by manufacturers, and government support for installing such charging stations. The market is predicted to witness a 10.7% CAGR during the forecast period (2020–2025) to see an increase in its revenue to $2.7 billion in 2025, from $1.5 billion in 2019. A charging point can have numerous connections, only one of which can be used at any particular time.

Based on type, the EVSE market is bifurcated into direct current (DC) and alternating current (AC) chargers. Of these, AC chargers held the larger share during the historical period (2014–2019), as they are cost-effective in their operation, installation, and manufacturing. During the forecast period, DC chargers will witness swifter growth, owing to their faster charging ability, which is also why they are mostly installed along highways, rather than at homes.

The installation of DC fast chargers is itself a key trend being witnessed in the market. Apart from their quick charging ability, they eliminate the need for having an AC-to-DC convertor on-board the vehicle, as they are themselves capable of performing the electricity conversion. Due to the concerns regarding the longer time taken by AC chargers, the installation of DC variants is increasing. For instance, during 2017–2018, the share of DC chargers in the total number of chargers in China rose from 24% to 36%.

The two bifurcations under the application segment are private and public, of which private chargers dominated the EVSE market in 2019. This is because of the rapid adoption of EVSE at the homes of individual EV owners, primarily in China. As such vehicles require a long charging time, people prefer to energize their batteries comfortably in their homes. During the forecast period, faster progress would be witnessed by the public bifurcation, as governments in numerous countries are taking initiatives to develop the EV charging infrastructure for public use.

Request to Get the Sample Report@ https://www.psmarketresearch.com/market-analysis/electric-vehicle-charging-station-market/report-sample

The major driving factor for the EVSE market growth is the rapid adoption of EVs, which is resulting in the increasing need for electricity supply infrastructure. With the air pollution levels increasing due to the burning of fossil fuels in conventional vehicles, electric variants are being promoted in numerous nations. The International Energy Agency reports a 2 million surge in EV sales, which crossed the 5 million mark in 2018. These sales are further expected to grow at a rate of 30% in the coming years, thereby boosting EVSE deployment.

The government of several countries are taking efforts to install EV charging stations. For instance, the South Korean government has targeted the deployment of 10,000 fast chargers by 2022. Similarly, India has plans to install 2,700 charging stations by 2023, in cities with more than 4 million residents. In the same vein, Canada sanctioned $4.6 million in 2019 for the installation of 92 DC chargers, while the Californian government has proposed a funding of $900 million for the deployment of 250,000 charging points by 2025.

Geographically, Asia-Pacific (APAC) was the largest EVSE market in 2019, as it accounts for the highest sale of EVs and installation of supporting infrastructure, led by China. As per the Electric Vehicle Charging Infrastructure Promotion Agency (EVCIPA), China had 330,000 EV supply stations in 2019, in comparison to the 67,500 in the U.S, in 2018-end. Apart from the extreme air pollution levels and government efforts to reduce them, the decreasing cost of ownership is also responsible for this.

Hence, with the growing adoption of EVs, the demand for equipment to supply electricity will keep increasing.

The automotive lithium-ion battery market is predicted to register a 15.9% CAGR during the forecast period (2019–2024).