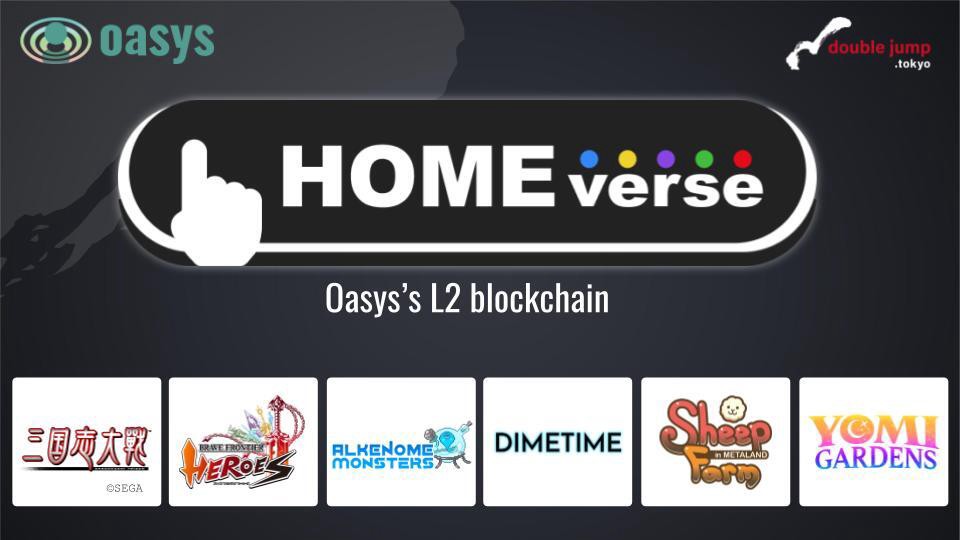 “This is only the beginning, we are looking forward to adding more titles to HOME Verse in the near future,” remarked Hironobu Ueno, CEO of double jump.tokyo.
Five Exciting Game Titles Complete Integration with Gaming Blockchain Oasys

When speaking on the game title reveals, double jump.tokyo said, “In addition to the recently announced SEGA blockchain game,”Sangokushi Taisen”, we are pleased to inform you that the following titles: Alkenome Monsters, Brave Frontier Heroes, Sheep Farm, Dime Time, and Yomi Games will be released.”

“This is only the beginning, we are looking forward to adding more titles to HOME Verse in the near future,” remarked Hironobu Ueno, CEO of double jump.tokyo. “Gaming on the ‘Oasys’ blockchain will help facilitate the mainstream adoption of these blockchain technologies and demonstrate their importance in moving the industry forward.”

Full details for each game title can be found on their official websites and on Twitter.

Founded in 2018, double jump.tokyo is the leading startup in Japan that specializes in NFT solutions and developing blockchain games, such as “My Crypto Heroes” and “Brave Frontier Heroes.” The company is a technology solution provider which partners with large-scale enterprises to help them successfully incorporate blockchain technologies into their games and company strategy. double jump.tokyo has partnered with some of the largest gaming companies including Square Enix, Bandai Namco, and Sega, as well as LINE and bitFlyer Holdings. The company’s goal is to facilitate the mainstream adoption of NFTs and blockchain technologies across the global gaming and entertainment industries while helping creators build the metaverse by providing the necessary technology and tools.