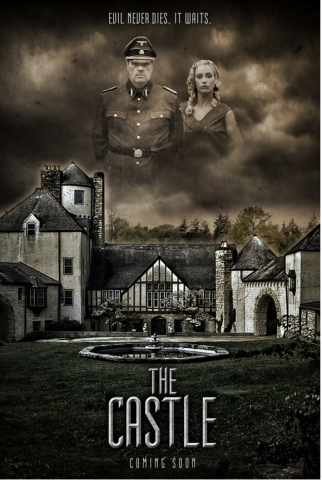 Distant Star Pictures have announced the launch of a crowdfunding campaign on Indiegogo.com for their upcoming movie “The Castle”, a mash of Horror and History, starring Matthew Ashford aka Jack Deveraux from the daytime drama Days of our Lives and Lew Temple aka Axel from The Walking Dead. John Patrick Tomasek, the writer, producer, and director of the film is ready to take the viewers on a thrilling ride through this edge of the seat drama that follows the story of Walter and Anna Brown who come to vacation in an old Castle in Germany, uninhabited since WWII. Their idea of a nice and peaceful getaway turns into a nightmare as they find themselves in a battle for their very soul against the Nazi ghosts.

During the last days of WWII, Nazi Colonel Hoffman and his men committed executions and tortures in the castle as well as looting Europe of its art and treasures while hiding it all in the Castle before being killed by Allied forces.

Present-day couple Walter and Anna stay in the castle, the first people in the Castle in 75 years. They realize soon they’re not alone in the castle as strange and terrifying events unfold and their dream vacation turns into a nightmare. The movie explores the psychological terror of a married couple as they are haunted by evil souls from the past.

The first 10 minutes of the movie is set in 1945, during the last days of the war before switching to the present day. The armies, battles, explosions, bloodshed and the whole world war scenario are created with the help of amazing sets, real German and American Tanks, Jeeps and armored trucks, real explosions and VFX.

The director will be casting hundreds of German and American re-enactors who come out on several tanks, armored vehicles and jeeps to fight a battle that looks like it’s taking place in Germany but will actually be filmed about 2.5 hours outside of Chicago, Illinois.

John Patrick Tomasek was inspired by the Castle location as well as Stephen Kings novel and movie, “The Shining” and the movie “House on Haunted Hill.”

Distant Star Pictures was started by John Patrick Tomasek in Chicago in 2009. With his passion and expertise in filmmaking, John has created many documentaries and short films in the past such as Distorted, and Forgiveness, both in the horror genre. With his latest feature film, The Castle, John is exploring a familiar genre of Horror and blending it with a little bit of History to make it even more fascinating to watch.

John has filmed an amazing trailer for the movie and created artwork. The campaign is currently seeking a funding of $10,000 on Indiegogo.com to help raise development costs while offering many exciting rewards to the backers! Rewards like being an extra in the movie, sharing a line with a famous actor, receiving a custom-made medal and many more great perks!