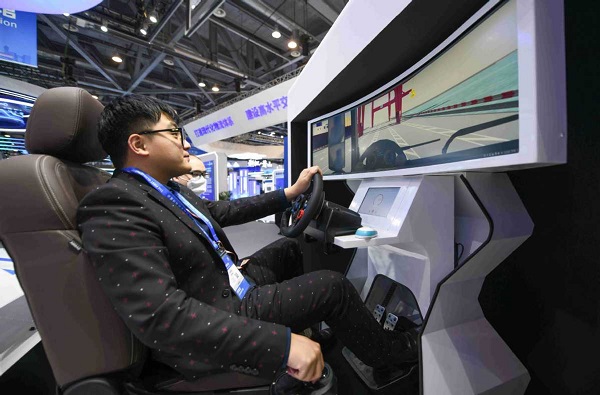 In terms of macroeconomic policies, a report to the 20th National Congress of the Communist Party of China emphasized the importance of expanding domestic demand and deepening supply-side structural reform.

Currently, the country has made great progress in many of the above-mentioned fields, but in terms of sectors related to digital economy, such as AI, industrial internet and big data centers, there is still much room to develop.

As for big data centers, the acceleration of digital transformation in various industries has led to soaring demand for data storage, data transmission and data processing. An action plan from the Ministry of Industry and Information Technology said that the annual growth rate of data center racks will remain at around 20 percent by the end of 2023.Data center racks consist of a physical frame to house electronic servers, cables, networking devices, cooling systems and other computing equipment.

With supporting policies, smart cities have become a critical application scenario of the digital economy. A smart city is a new concept and model that uses digital technologies, such as internet of things, cloud computing, big data and spatial geographic information integration to drive new models like smart urban planning, construction and management, and related services.

In terms of applications — online government affairs, smart transportation, medical care, education and other fields — are speeding up their integration into peoples’ lives.

To start with, smart transportation has become the main direction of smart city construction. Through comprehensive perception, collaborative interconnection and dynamic regulation of various transportation elements, the management and operation of downstream highways, airports, ports, rail transit and other multiple scenarios can be achieved.

According to 36Kr, a tech media research organization, the market size of smart transportation in the country is expected to hit 1 trillion yuan by the end of 2023.

In addition, the smart city concept has been integrated into social governance, which includes digital government affairs, smart education, healthcare and other public services. Through flexible dispatching of service resources, the digitalization level of social governance has been improved.

At present, the construction of new infrastructure supporting smart transportation is accelerating. According to the China Academy of Information and Communications Technology, a government think tank, more than 3,500 kilometers of roads in the country had achieved intelligent upgrades by the end of 2021.

At the same time, pilot applications of smart transportation and intelligent connected vehicles have been gradually rolled out in many places across the country.

Beijing and Shanghai were named as the first batch of pilot cities for such vehicles in April last year while 10 other cities including Chongqing and Shenzhen joined in December last year. Notably, with the integration of technologies, like smart bikes and cellular vehicle-to-everything technology, greater coordination between vehicle and road will be gradually achieved.

Through all-round connection and efficient interaction between people, vehicles, roads and clouds, vehicles can be supported to obtain more information, so that autonomous driving technology can be improved to drive the construction of a smart transportation system.

More importantly, the continuous improvement of the smart transportation system and the acceleration of the construction of smart cities will boost the fundamentals of the technology, media and telecommunications industry.

In the future, smart transportation systems, real-time interaction of vehicles and roads will be realized, and a digital twin city will be built.

Smart transportation will improve people’s travel experiences in terms of safety, efficiency, and energy-saving. The development and popularization of unmanned driving will further change people’s lifestyles and become an important part of smart cities.

With the gradual implementation of related application scenarios, the growth of the TMT industry will be accelerated. Combined with the forecast of Haitong Securities, we expect that the annual growth rate of the telecommunications industry will reach 10 percent to 15 percent going forward.