American Dreaming: A Memoir of Interracial Love, Estrangement, and Race Equality is an artfully written story of two generations, both struggling against convention. Using dreams, commentary about the state of systemic racism and race relations in America, and an intimate portrayal of her marriage and fractured family relations, Liuzzi Hagan offers a lesson on healing the racial divide.

Winston-Salem, NC – February 1, 2021 – In the 1940s, Liuzzi Hagan’s father, Frank, an Italian-American, met Ruth, an Australian of Irish descent, in Ryde, NSW, Australia, where he was stationed during World War II. They married and settled in Albany, New York, where Frank’s family refusedto accept a foreigner into their fold. Much like our country today, the resulting division, vitriol, and isolation were overwhelming for the couple, and their relationship disintegrated into arguments and alcoholism. 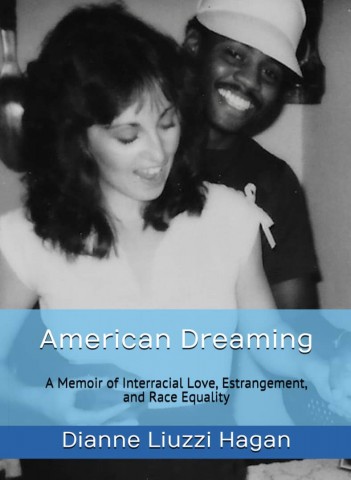 Thirty years later, in 1976, their daughter, Dianne, met Ronald, who is Black, during their freshman year of college at Syracuse University. Against external judgments, threats of violence, and her family’s strong disapproval, the fell deeply in love. She says of their first meeting: “Ronald Hagan and I were fated for constancy. Both ofus were born the fourth of five children, and we both have creative, sensitive minds. Both of us are fearless about speaking our truth, no matter how unwelcome it is at times. The first time we laid eyes on each other… neither of us was able to look away. Whose heart was beating faster is up for debate, but I can say for certain that we were each taken at that moment by the eyes of the other.” Unlike her parents, Ronald and Dianne found solace, equality, acceptance, and a peaceful reconciliation in their relationship.

Liuzzi Hagan is a life-long advocate for racial equality. She says, “Hiding the truth of our experiences would be like saying, ‘Hey, I’m drowning, but please don’t stop your picnic just for me. That delicious pickle deserves your full attention.’ I’d much rather race the discomfort and overt hatred head-on then pretend it didn’tor won’t happen.”

American Dreaming is an appeal for systemic change, a disavowal of white supremacy, and a new post-pandemic normal in America. It includes discussion questions for classrooms and book clubs.

Both books are currently available on Amazon.com