As per Crohn’s & Colitis Foundation, Crohn’s disease (CD) is a type of inflammatory bowel disease (IBD). It is an inflammatory condition of the gastrointestinal tract, which most commonly affects the end of the small bowel (the ileum), the beginning of the colon, and any part of the gastrointestinal (GI) tract from the mouth to the anus. Additionally, ulcerative colitis, an IBD that causes long-lasting inflammation and ulcers (sores) in your digestive tract, is limited to the colon, also called the large intestine.

Crohn’s disease is characterized by skip intestinal lesions (that is, areas of inflammation interposed between normal-appearing mucosa) anywhere in the GI tract. It involves chronic, relapsing transmural inflammation that can lead to Chronic abdominal pain, diarrhea, obstruction and/or perianal lesions.

In Crohn’s disease, the immune system mistakenly attacks healthy bacteria in the GI tract. Chronic inflammation causes thickening of the intestinal wall, which triggers the symptoms. Several factors have been implicated in causing Crohn’s disease, including a dysregulated immune system, an altered microbiota, genetic susceptibility, and environmental factors, but its cause is unknown. Between 5% and 20% of people who have an IBD have a first-degree relative with one. The risk is higher in Crohn’s than ulcerative colitis, and higher when both parents are affected (as per Crohn’s & Colitis Foundation of America) Crohn’s disease is more frequent in women than men, as estimated by the Centers for Disease Control and Prevention. 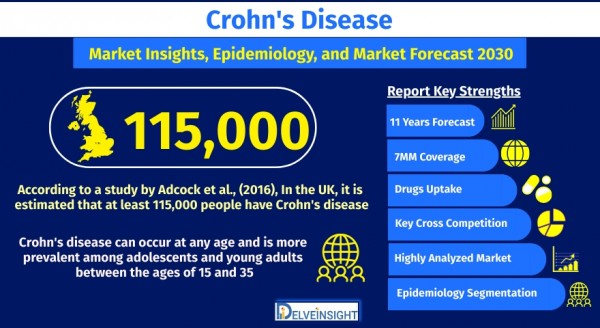 The disease can occur at any age and is more prevalent among adolescents and young adults between the ages of 15 and 35.

According to a study conducted by Galeone et al., (2019), in Italy, the area of Casteltermini in Sicily had one of the highest prevalence ratios of CD (322/100,000) reported worldwide.

Studies have demonstrated that the incidence rates and prevalence rates for Crohn’s disease have increased since the mid-1970s. Its prevalence has continually increased over the past 50 years, with the highest incidence being reported in northern Europe, the United Kingdom, and North America.

The report gives a thorough detail of Crohn’s Disease market trend of each marketed drug and late-stage pipeline therapy by evaluating their impact based on the annual cost of therapy, inclusion and exclusion criteria, mechanism of action, increasing patient pool, covered patient segment, expected launch year, competition with other therapies, and view of the key opinion leaders.

Extensive research and development activities of pharmaceutical companies for developing therapies for Crohn’s disease and rising prevalent population, changing lifestyles, rising in smoking will further fuel the growth of the market.

The dynamics of Crohn’s Disease market are anticipated to change in the coming years owing to the improvement in the diagnosis methodologies, raising awareness of the diseases, incremental healthcare spending across the world, and also expects the launch of emerging therapies during the forecast period of 2020–2030. Companies across the globe are working toward the development of new treatment therapies for Crohn’s disease rigorously. Some of the Key players in the Crohn’s Disease market includes:
UCB
Abbvie
Genetech
Gilead Sciences
Celgene Corporation
Millennium Pharmaceuticals
And many others

Drugs Covered
Filgotinib
Risankizumab
Etrolizumab
PDA-001
And many other