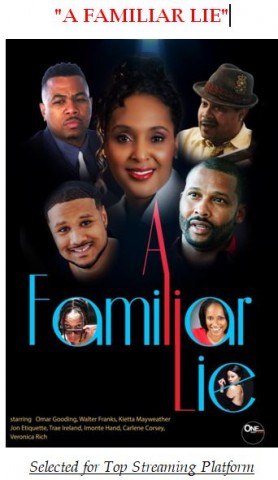 Los Angeles – August 22, 2020 – Breaking News ONE-SHOT FILMS is doing a COVID-19 special screening for the new release of the HIT movie “A Familiar Lie.” Starting August 27 until September 3, viewers can stream this drama/thriller movie for only 1 dollar, that’s right for one whole week viewers.

A Familiar Lie is a story of how a lie turns fatal when you don’t know the game. Camille thinks her husband Roger is cheating, but when she finds out her suspicions are unfounded, it’s too late. Mike has put the word out on the streets to find Roger, and when deadly forces come together, there’s no turning back as families torn apart.

As The film’s Executive Producer Elerson brings on other executive producers; Carol Angela Davis, Anthony D. Bell Jr., Trae Ireland, Shyan Selah, Kietta Mayweather-Gamble, producer Omar Gooding, Walter Franks and co-producer Virgil Fairley to bring viewers a story with a message well known to those who live by their wits and die with their secrets.

Elerson, Ireland, Gooding, and Franks leave no stone unturned when presenting the story, including a soundtrack distributed by Brave New World Universal-INGrooves and made available on all major music platforms including Apple Music, Pandora, Spotify, and Amazon Music.

The soundtrack features Grammy-winning producer Charles Dunlap and Focus, a theme song written and performed by international recording artist Shyan Selah in addition to some of the nation’s best beyond-emerging recording artists, writers, and producers.

Stand out artists include:

“I Ain’t That Chick.”
Suga-T/Prince Damon

The official trailer for “A Familiar Lie.”: https://www.youtube.com/watch?v=DRxTSZwLJ4M