“Airwheel: CeBIT 2016”
A dreamlike skateboarding experience is brought by Airwheel M3, Peter adds. Peter has wrote to Airwheel describing his experience with Airwheel M3. It arises his passion, as it makes skateboarding even more exciting and relaxing. Let us have a better understanding of M3 from Peter’s feedback.

It arises his passion, as it makes skateboarding even more exciting and relaxing. Let us have a better understanding of M3 wireless remote control skateboard from Peter’s feedback. And the M3, combining this features and the advanced technology, makes the dream of need for speed and passion for skaters come true. In the first place, the speed is to be solved. M3, powered by battery electricity instead of manual work has made the skateboarding as fast as 15km/h and the maximized speed of 18km/h. because, the high quality lithium battery and magnetic levitation motor bring more powerful output power. Various speeds can be released thanks to the 2.4G wireless remote control within 10m. It is worthy to mention that different speeds are suitable for players with different levels. For Peter, he has been proficient in playing skateboard, and he can easily speed up to a higher speed and rush onward a slope, due to the tremendous momentum.

The speedy skateboarding is guaranteed by safety and comfort. The elastic anti-damping block made of TPU material, can reduce the discomforts caused by skating on bumpy roads. Peter is able to conquer varied terrains due to the anti-damping blocks equipped beneath the four large wheels. 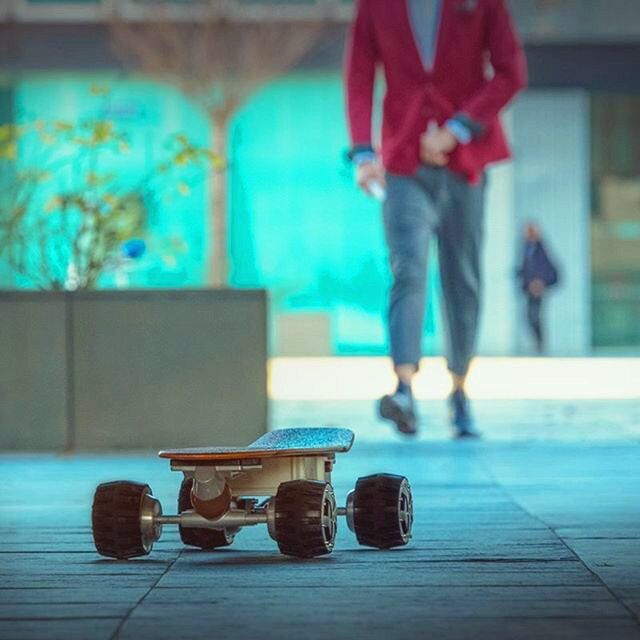 Then, the DIY attribute of M3 motorized skateboard releases Peter’s passions, as he is able to enjoy very different skateboarding according to his own needs and preference, for instance, the size and the appearance of the board can be changed. Meeting the demands of speed and passion, Peter thinks highly of Airwheel M3.